Israeli Army Kills A Palestinian, Injures Three, Then Abducts Two Of Them 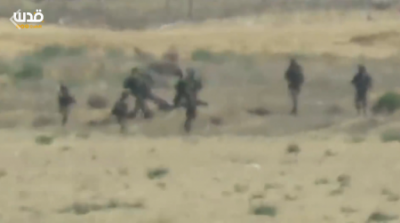 Israeli soldiers killed, on Monday evening, at least one Palestinian, and injured three others, including two who were then abducted by the soldiers after being injured, and one teenager who was rushed to a Palestinian hospital in Rafah, in the southern part of the Gaza Strip.

The Israeli news agency Haaretz reports that the four young men were trying to cross the border into Israel when the Israeli army spotted them and began shooting.

But video footage of the incident published by Quds News shows that the soldiers had invaded the Gaza Strip and were well within Palestinian territory when they grabbed the young men and dragged them across to their military base.

The disturbing footage shows the soldiers pulling one young man who is lying motionless on the ground, picking him up by arms and legs and dropping him repeatedly as they drag him across the stony ground. It is unclear whether the young man was alive or dead at the time.

Although the Israeli military claimed that the young men were “armed with fireworks”, no evidence was presented to back this claim.

The army also alleged that the soldiers “heard shots being fired at them,” but there has been no confirmation for his claim.

Only one of the wounded Palestinians, a 16 year old child, managed to escape the army’s attempt to abduct him, and was rushed to Abu Yousef Najjar Hospital, in Rafah, suffering a gunshot wound to his shoulder.

The three other Palestinians were taken by the soldiers who invaded the Palestinian lands, near the border fence, and took them away.

A Palestinian medic said the Palestinians (as confirmed by the video footage) did not cross the fence, and that he and his colleagues were only twenty meters away from the wounded Palestinians.

“We tried to provide aid to the wounded Palestinians; we were just twenty meters away from them,” the medic said, “but the soldiers threatened to shoot us, and forced us away.”

It is worth mentioning that some media outlets have reported that two of the young Palestinians were killed, while others report that one was killed. Because the Israeli military is holding three of them, the extent of their wounds is unknown, and it is unclear whether one or two of them are dead.

The Israeli army claimed that the Palestinians were carrying cutters and flammable materials, and “were attempting to set fire to a vacant Israeli military sniper post along the border fence.

The Israeli army issued a statement holding the Hamas movement in Gaza fully responsible for “all attempts to cross the border fence and attack military installations.”

So far, the names of the Palestinians, including the deceased, remain unknown as they, except the wounded teen who was rushed to a Palestinian hospital, have been captured by the army.