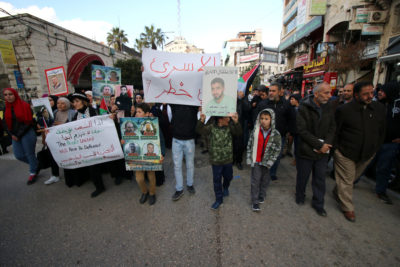 In the West Bank city of Jenin on Sunday, dozens of Palestinians gathered for a demonstration in solidarity with Palestinian detainees inside Israeli jails.

Governor of Jenin, Kamal Abuelrub, told the crowds that Israeli occupation authorities have recently stepped up attacks on the Palestinian people and that a part of those attacks has been the assault on Palestinian journalists, ‘apparently’ in an attempt to suppress press that uncovers the occupation’s actions.

The solidarity march was reportedly attended by dozens of local Palestinians in Jenin and came in the wake of an Israeli trial of two journalists detainees, Mojahed Mefleh and Yazan Abu Salah.

From his part, Omar Nazzal, spokesperson for the Palestinian Journalists Syndicate in the West Bank, decried what he termed deliberate Israeli targeting of Palestinian journalists, with the aim of silencing the truth.

Participants of the solidarity march chanted slogans against Israeli detention of Palestinians, in general and journalists, in particular.

Israeli army actions of abductions have remained in place for about five decades, now, as Palestinians in the occupied Palestinian territories, including the West Bank, have been resistant of an Israeli occupation of their territories, since 1967.

Currently, Israel holds about 5,000 Palestinian detainees in various detention centers. Among those detainees there are 15 media practitioners, including female ones, Mays Abu Ghoush and Boshra Altaweel.

In the meantime, the family of Palestinian detainee, Azmi Naffa’, from the West Bank city of Jenin, voiced on Sunday deep concern for their detained son.

The father of Azmi told local media that his son has been jailed in the Jalbou’ Israeli detention center and the detention authorities have been procrastinating providing needed medical care to Azmi.

According to the parent,  Azmi has suffered fractures into his lower lip, due to an injury, caused by an Israeli bullet, five years ago, at the Z’atara Israel-controlled roadblock, south of  the West Bank city of Nablus.

The father confirmed that his son needs a cosmetic surgery to his lips, including a jawbone transplant.

Back in January 2015, an Israeli court indicted the now-detainee Azmi Naffa’ with 20 years of imprisonment, alleging that the man plotted and carried out a crushing attack against Israelis.