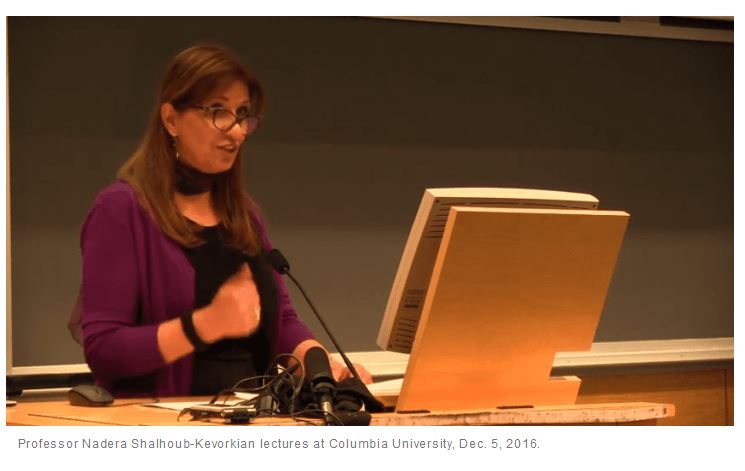 Israeli occupation authorities have permitted large pharmaceutical firms to experiment on Palestinian prisoners, and have been testing weapons on Palestinian children, a Hebrew University professor disclosed in a recent lecture series.

An Israeli professor disclosed in a recent lecture series at Columbia University that Israeli authorities have permitted large pharmaceutical firms to experiment on Palestinian prisoners, and have been testing weapons on Palestinian children.

Promotional material for the events describe her lecture as illustrating through “the voices and writings of Jerusalemite children who live under Occupation” that Israel’s practices of “surveying, imprisoning, torturing, and killing can be used as a laboratory for states, arms companies, and security agencies to market their technologies as ‘combat proven.’”

Shalhoub-Kevorkian’s presentation was based on data she gathered for a research project for the university. The work, titled Arrested Childhood in Spaces of Indifference: The Criminalized Children of Occupied East Jerusalem, was published in the Canadian Journal of Women and the Law in 2018 and co-authored by Shahrazad Odeh, who is also on the Faculty of Law and Institute of Criminology at Hebrew University.

In the article, the authors demonstrate how Israel’s policy of targeting Palestinian children and childhood through the criminal justice system is fundamental to the state’s mechanism of colonial dispossession. They shed light on the critical role that the Israeli legal system plays in the state’s “racist project.”

Shalhoub-Kevorkian revealed in her lecture at Columbia University that Israeli occupation authorities issue permits to large pharmaceutical firms, which then carry out tests on Palestinian prisoners.

Telesur recalls that as far back as July 1997,

Israeli newspaper Yedioth Ahronoth reported remarks for Dalia Itzik, chairman of a parliamentary committee, acknowledged that the Israeli Ministry of Health had given pharmaceutical firms permits to test their new drugs of inmates, noting that 5,000 tests had already been carried out.

The recent, well-publicized incident of the death of an Israeli prison inmate, Palestinian Fares Baroud, raised suspicions that he may have been a test subject. Israeli authorities refused to relinquish the body. Baroud suffered from a number of illnesses.

“Palestinian spaces are laboratories,” she explained. “The invention of products and services of state-sponsored security corporations are fueled by long-term curfews and Palestinian oppression by the Israeli army,” and “Israeli security industry [is] using them as showcases” to boost security technologies and weapon sales in the global market.

The Hebrew University of Jerusalem distanced itself from Shalhoub-Kevorkian’s claims, releasing a statement,

The views expressed by Prof. Nadera Shalhoub-Kevorkian don’t represent or express in any way the views of the Hebrew University or the university administration, but are her personal opinion that reflect only her views.

Nadera Shalhoub-Kevorkian is the Lawrence D. Biele Chair in Law at the Faculty of Law-Institute of Criminology and the School of Social Work and Public Welfare at the Hebrew University of Jerusalem and a Global Chair in Law at Queen Mary University of London. Her research focuses on law, society, and crimes of abuse of power.  She studies the crime of femicide and other forms of gendered violence, crimes of abuse of power in settler colonial contexts, surveillance, securitization and social control, and children, trauma, and recovery in militarized and colonized zones. Dr. Shalhoub-Kevorkian is a criminologist and specialist in human rights and women’s rights.

Shalhoub-Kevorkian’s most recent book is entitled: Security Theology, Surveillance and the Politics of Fear,” published by Cambridge University Press. She also authored “Militarization and Violence Against Women in Conflict Zones in the Middle East: The Palestinian Case Study” published by Cambridge University Press, 2010. She has published articles in multi-disciplinary fields including British Journal of Criminology, International Review of Victimology, Feminism and Psychology, Middle East Law and Governance, International Journal of Lifelong Education, American Behavioral Scientist Journal, Social Service Review, Violence Against Women, Journal of Feminist Family Therapy: An International Forum, Social Identities, Social Science and Medicine, Signs, Law & Society Review, and more. As a resident of the old city of Jerusalem, Shalhoub-Kevorkian is a prominent local activist. She engages in direct actions and critical dialogue to end the inscription of power over Palestinian children’s lives, spaces of death, and women’s birthing bodies and lives.

Kathryn Shihadah is staff writer for If Americans Knew. She blogs at Palestine Home.