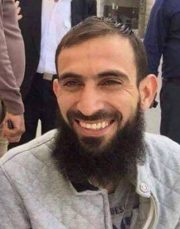 The Palestinian Detainees Committee has reported that a detainee, held by Israel since June 16, is ongoing with his hunger strike for the twelfth consecutive day, protesting torture during interrogation, insults and inhumane living conditions, in Asqalan Israeli prison.

The committee said that the detainee, identified as Rif’at Jibreel Jamil Abu Fara, 29, has been subject to torture, in addition to very difficult, inhumane conditions, since his abduction.

Lawyer Karim ‘Ajwa of the Detainees’ Committee stated that Abu Fara is only drinking water and that he is determined to continue his strike, especially after a military court ordered him under further interrogation.

Abu Fara is from Surif town, north of the southern West Bank city of Hebron; his brothers Rafe’, 30, and Ala’, 22, were kidnapped by the army on June 7th.