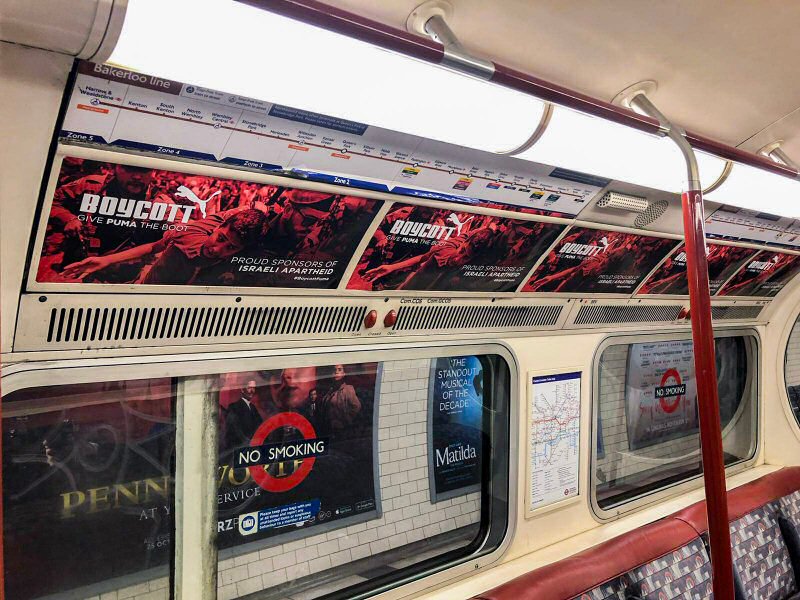 6:32 PM
October 26, 2019 / Palestinian Campaign for the Academic and Cultural Boycott of Israel (PACBI)

Actions in more than 50 locations are planned as part of a coordinated initiative to protest PUMA‚Äôs sponsorship of the Israel Football Association (IFA). The IFA includes¬Ýfootball teams based in illegal Israeli settlements¬Ýin the occupied Palestinian territory.

Over¬Ý200 Palestinian sports teams¬Ýhave urged PUMA to end its sponsorship of the IFA ‚Äúdue to its deep complicity in Israel‚Äôs violations of international law and Palestinian human rights‚Äù.

Campaigners are calling on PUMA to end its support for Israel‚Äôs decades-old military occupation by terminating its sponsorship contract with the IFA.

At a match this Saturday, fans of Belfast‚Äôs Cliftonville Football Club will be calling on the team to end its sponsorship deal with PUMA. Last week, the Donegal Celtic Football Club in Belfast¬Ýposed¬Ýwith Boycott PUMA signs in support of the call from Palestinian teams.

A dozen cities across France will join the day of action, with calls for Olympique de Marseille Football Club to drop PUMA.

In New Zealand, human rights activists are¬Ýcalling¬Ýon the Silver Ferns, the Women‚Äôs National Netball Team, to show the ‚Äúcharacter and values‚Äù they are known for by dropping PUMA as a sponsor.

Groups in Manchester and Girona are calling on City Football Group, owners of Manchester City and Girona Football Club, to end the group‚Äôs sponsorship deal with PUMA.

On social media, supporters are¬Ýposting¬Ýimages of PUMA clothing, shoes and bags with ‚ÄúBoycott‚Äù written over the logo, using the hashtag #RebrandPUMA.

Stephanie Adam, of the Palestinian Campaign for the Academic and Cultural Boycott of Israel (PACBI), said:

If PUMA wants to show real devotion to ‚Äúuniversal equality, sports fans and supporters of Palestinian human rights around the world insist, it should end its support for Israel‚Äôs violations of international law and assaults on Palestinian families.

The¬ÝPalestinian Campaign for the Academic and Cultural Boycott of Israel (PACBI)¬Ýwas initiated in 2004 to contribute to the struggle for Palestinian freedom, justice and equality. PACBI advocates for the boycott of Israeli academic and cultural institutions, given their deep and persistent complicity in Israel‚Äôs denial of Palestinian rights as stipulated in international law. Visit PACBI at¬Ýhttps://bdsmovement.net/pacbi¬Ýand follow us on Twitter¬Ý@PACBI