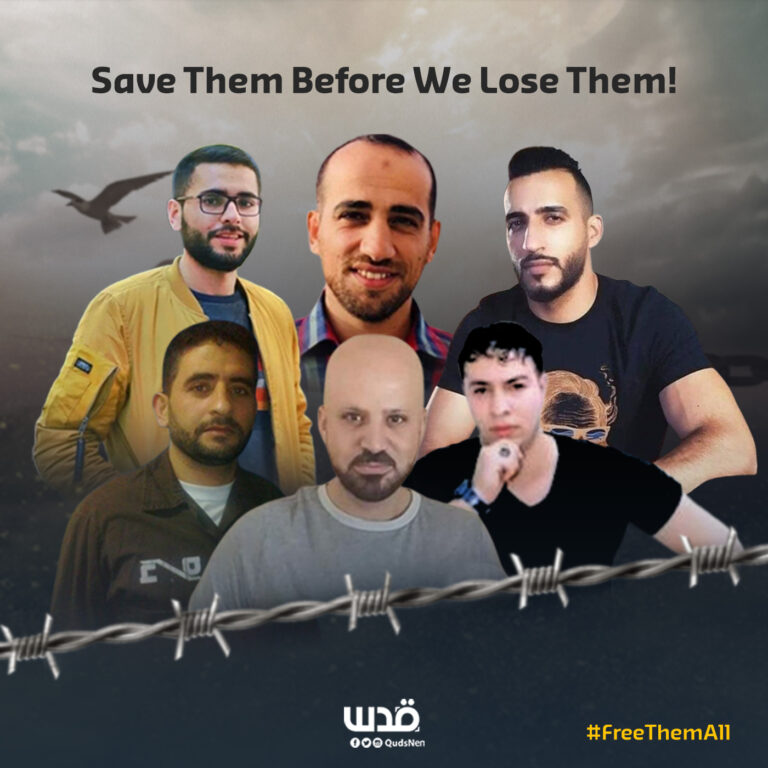 October 29, 2021 (Quds News Network) – Families of six-hunger-striking Palestinian prisoners in Israeli jails have sent a letter on Friday to US Congress members and human rights organizations, urging them to intervene and save their sons’ lives amid fears of losing them.

In their letter, the families of the six Palestinian prisoners, who have been in an open-ended hunger strike in protest against their administrative detention without a charge or trial, have called on the US Congress members and human rights organizations to save their sons’ lives who might die any moment amid severe health deterioration.

The families of the six prisoners said they have turned their appeal to the US Congress and concerned human rights groups as the Biden’s administration and the international community have placed their concern and focus on Israel’s latest settlement expansion and decision to label six Palestinian human rights NGOs as “terror groups.”

The families said the Israeli occupation government is taking advantage of the above-mentioned situation “to impose a blackout of information” on their sons.

“Our boys are in very serious conditions, putting their lives in danger. Our boys are dying slowly while we feel hopeless and powerless and the international community continues to watch,” the families said in the letter.

They continued, “The voices of our sons might not be heard internationally, thus we urge you to convey their voices. Feeling powerless to save the lives of our boys is the hardest thing to go through. So, we urge you to save their lives and pressure the Israeli authorities to face their responsibilities as an occupying power.”

(1)
Dear Congress members and Human Rights organizations,
As Palestinians suffer from the Israeli daily violations of their basic rights, and as the Biden administration, and the international community, are focusing on settlements and the illegal expansion of occupation

Six Palestinian prisoners in Israeli jails have been in an open-ended hunger strike in protest against Israel’s detention without a charge or trial.

The six hunger-striking prisoners’ health condition has been deteriorating severely, as they have been suffering from powerful fatigue, exhaustion, headache, severe weight loss, and deficiency of fluids in the body.

One of them has partial loss of memory and Bacteremia, another has loss of sight and problems in his nervous system, and the other might die any moment.

Over 40 Palestinian detainees started hunger strike since the start of 2021, in protest against Israel’s detention without a charge or trial.

Administrative detention is illegal under international law, however, the occupation state uses it to repress the Palestinian people.

‘Israel’ routinely uses administrative detention and has, over the years, placed thousands of Palestinians behind bars for periods ranging from several months to several years, without charging them, without telling them what they are accused of, and without disclosing the alleged evidence to them or to their lawyers.

Thus, the hunger strike is a method of a non-violent resistance which the prisoners use to protect their lives and their fundamental rights and a response to the occupation racist policies which they face in the prisons.

There are 4,650 Palestinian political prisoners held in Israeli jails, among the prisoners are 520 administrative detainees held without charge or trial, 200 child prisoners and 39 female prisoners.