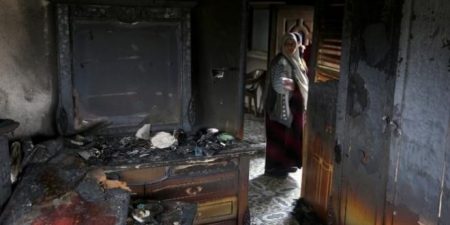 A source in the Israel Security Agency, Shin Bet, reported a new generation from the Revolt movement, a radical Jewish extremist group in the West Bank area, and its members, are concentrated in the Bladim settlement outpost, near Nablus.

The “formal generation” of this organization was responsible for crimes against Palestinians, including the arson attack of the Dawabsha family house in Douma village, near Nablus, in which three members of the family were killed, including 18-month-old baby, Ali.

The group is also responsible for arsoning The Church of the Multiplication of the Loaves and Fishes, on the shores of Lake Tiberias. The announcement of the emergence of this second generation is a warning of “radical Jewish terrorism”, Haaretz daily reported on Sunday, according to the PNN.

Members of this terrorist organization, which emerged from the extremist nationalist right-wing Hilltop Youth group, attack Palestinians, non-Jewish sites and Israeli leftist activists as well as Israeli soldiers, as a form of revolt, since the soldiers, they claim, did not “use much force against the Palestinians” during the eviction of Amona settlement outpost near Ramallah, back in February.

It was thought that their terrorist activities had stopped. However, Shin Bet’s surveillance operations confirm that member of the organization who are Jewish kids and young people are re-gathering in order to organize more acts of terrorism.

The leader of this organization, Meir Ettinger, is the grandson of the fascist Rabbi Meir Kahana. Shin Bet described him as “the number one goal of the Jewish circle”.

The Israeli army had dismantled the illegal settlement outpost of Baladim. The Shin Bet reported that the groups has lessened its activities following the evacuation of the outpost, the arrest of a number of members of the terrorist organization, and after issuing . of the organization.

However, Haartez quoted a source whom they described as always consequent on both Shin Bet and Hilltop youth activities. The source wrote that describing this group as a “terrorist organization” is exaggerated, and that the The Revolt movement is an unknown social group. It has a few dozen members who are between the ages of 16 and 25,and they do not act like an organized terrorist group.

Shin Bet also reported that, in addition to the new members of the group, old members of the group are returning. The group’s new activists do not know the methods of the Shin Bet, but are eager to carry out the activities of the organization and have no fear or intention of holding back, as the old members.

The group has committed several acts of terror, following the evacuation of the Amona settlement outpost, including the burning of two cars in Howwara and Burin, near Nablus. They have also attempted to damage a diplomatic car near the Spanish council in Jerusalem.