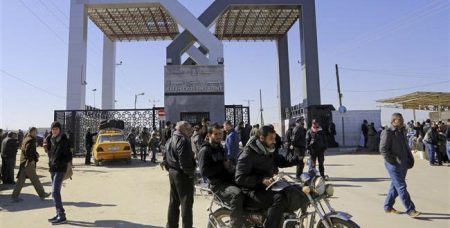 Rafah Crossing, the main artery for Palestinians in Gaza to travel out of the Strip, has been closed for 103 consecutive days, with no indication that it will reopen soon, Quds Press reported yesterday.

The crossing’s gates were last opened on 9 March when a few thousand people travelled through it. More than 30,000 Palestinians have registered to travel through the border, most are students, patients and those separated from their families.

Rafah was opened in May only to allow those stranded in Egypt to return to their homes in Gaza, PNN further reports.

So far, this year, the crossing has been opened in both directions for only six days, meaning it has been closed for 160 — the longest spell that the border has been sealed since the start of an Israeli blockade on the enclave, which has now entered its eleventh year.

Even Egypt has  allowed diesel to enter the Gaza Strip through the Rafah crossing. According to the information office at the border, 11 trucks entered Gaza loaded with one million litres of diesel which are destined for the enclave’s power plant.

More trucks are expected to arrive later today, a source said, adding that fuel pumping would continue for several days.

The Rafah crossing has been opened for the entry of diesel only, the official said.

Gaza’s electricity plant is expected to start operating within 24 hours, after it was forced to shut down in mid-April, due to a shortage of fuel.

This week, Israel reduced the electricity it supplies to the besieged enclave even further, worsening an already dire humanitarian situation. The Palestinian Energy Authority said the Israel Electric Corporation (IEC) had cut by eight megawatts the 120 megawatts it supplies to the Gaza Strip.

Egypt’s actions come following a meeting between a Hamas security delegation and officials from the Fateh movement, who support former leader Mohammed Dahlan, under the auspices of the Egyptian leadership, last week.