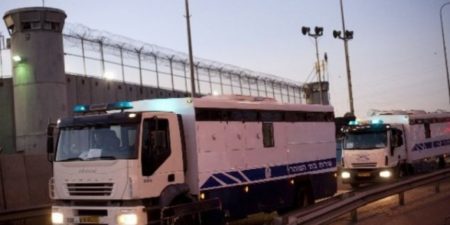 PNN reports that Israeli prison forces have stormed section 6 of the Ramon jail and transferred all its inmates to Nafha jail.

According to the Palestinian Commission of Detainees’ and Ex-Detainees’ Affairs, on Sunday, the forces transferred the prisoners in the cold weather, without allowing them to change their clothes or take their personal belongings.

The Ramon prisoners told a lawyer from the Commission that they intend to take protest steps in protest at the escalating raids on their cells and the violations committed against them during the raids and in solidarity with hunger striker Ahmed Zahran.

Zahran has been on hunger strike for 104 days in a row, now, in protest against his administrative detention without charge or trial.

The commission warned, along with the Prisoners’ Society, of the serious deterioration of the detainee’s health status as a result of the strike, confirming that Zahran suffers from headache, joint pain, severe exhaustion, and salt and liquid deficiency, as he has lost over 30kg of his weight.

Al Ray Palestinian Media Agency notes that Zahran, aged 42, a resident of Deir Abu Mash’al village to the northwest of Ramallah, has spent about 15 years in Israeli occupation jails.

The commission indicated that detainee Zahran has begun his open-ended hunger strike after the Israeli occupation authorities did not fulfill its promise to end his administrative detention in the last strike that went on for 38 days and ended last July.

According to Palestinian figures, about 5,700 Palestinians, including 48 women and 250 children, are currently languishing in Israeli detention jails.

Among them, close to 500 Palestinians are currently being held under Israel’s illegal policy of administrative detention, under which prisoners can be held for renewable six-month periods without charge or trial