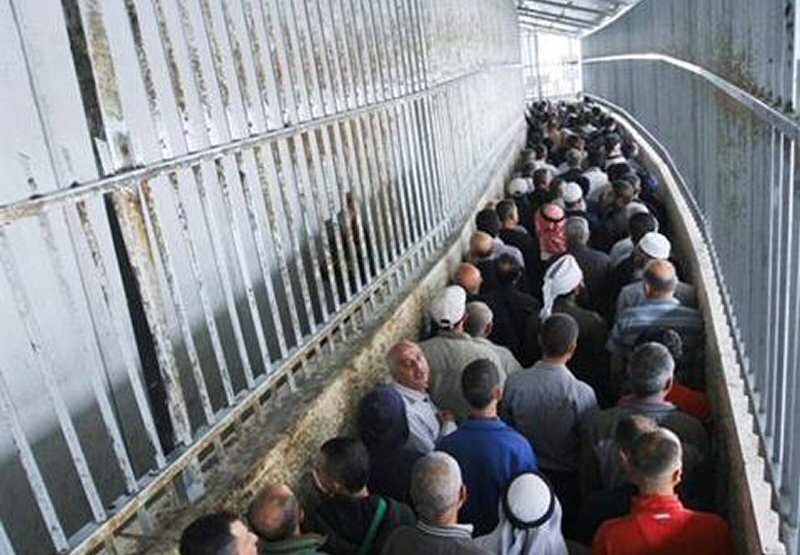 Over the past month, the Lebanese authorities have unleashed a brutal crackdown on Palestinian workers. In June, Lebanese Minister of Labour Kamil Abu Sleiman decreed that Palestinian refugees in Lebanon must obtain work permits like other foreign workers.

This move added to the already precarious situation of many Palestinian workers who are not only barred from employment in 72 professions in Lebanon, but over the past few years have also been forced to compete with Syrian refugees, equally desperate to find jobs.

In response, Palestinian refugees protested en masse in Beirut and throughout the refugee camps, not only against what they rightly saw as an unfair decision, but also against Lebanon’s decades-old official policies which have contributed to Palestinian economic and political alienation.

It is important to see these developments not only in the context of the current political climate in Lebanon, but also within the broader context of the Palestinian workers’ historic struggle against colonialism, capitalist exploitation, and domestic feudalism. The battles Palestinian workers have fought across multiple frontlines – from Israel to the Occupied Territories, Lebanon and elsewhere – have always been at the heart of the Palestinian struggle for basic human rights.

In an essay – The 1936-39 Revolt in Palestine – published shortly before his assassination, Palestinian novelist Ghassan Kanafani argued that three enemies pose the “principal threat” to the Palestinian national movement: “the local, reactionary leadership; the regimes in the Arab states surrounding Palestine; and the imperialist-Zionist enemy”.

Class conflict within Palestine, as well as within the larger Arab region, is rarely considered a pressing issue in the misleadingly termed “Arab-Israeli conflict”. Little focus is placed on Palestinian working classes, whether in Palestine or the Middle East, even though this is required to develop a coherent analysis of the Palestinian struggle, one that is able to link its historical roots to its present manifestations. However, Kanafani, who was killed by Mossad in 1972, was aware of the importance of such dynamics, which remain in place until this day.

“The change from a semi-feudal society to a capitalist society was accompanied by an increased concentration of economic power in the hands of the Zionist machine and, consequently, within the Jewish society in Palestine,” Kanafani wrote.

That accumulation and the parallel oppression of Palestinian workers started in the early 20th century. In the 1920s, Jewish settlers created the Histadrut, branded as a Jewish trade union. The organization, however, did not really function as a regular syndicate; instead, it was “a great colonizing agency”, as former Israeli Prime Minister Golda Meir called it, without which Israel, as a state, would not have existed.

One of Histadrut’s early missions was to ensure employment for newly-arrived Jewish settlers in Palestine and the systematic exclusion of the Palestinian Arab workers. As a result of continued colonization and hostile policies by the Jewish settlers and their British allies, Palestinian businesses began to suffer, while Palestinian workers struggled to find jobs, especially in coastal cities like Haifa and Jaffa.

Many of the unemployed, alienated workers joined the armed rebel groups led by Sheikh Izz al-Din al-Qassam in the early 1930s. After his death in 1935, his followers, joined by Palestinian labourers, initiated a general strike across Palestine which transformed into a three-year-long mass rebellion. Thousands of them were killed in the battle or were executed by British colonialists and their Zionist allies.

As Kanafani pointed out, by the late 1930s, “[Palestinian] Arab proletariat had fallen victim to British colonialism and [Zionist] Jewish capital, the former bearing the primary responsibility”.

Hundreds of thousands of Palestinians were also forced to seek safety outside Palestine, where they found themselves subject to different social, economic and political challenges, all marked by increased vulnerability and disempowerment. And as the Lebanese example demonstrates, many Palestinians remained at the mercy of ever-changing hostile policies of host governments.

In the period between the creation of Israel and the latter’s occupation of the remainder of historic Palestine, in June 1967, many Palestinian workers, who remained within Palestine faced the hardship of displacement and a suffocating matrix of economic dependency on Egypt and Jordan, which administered the Gaza Strip and the West Bank, respectively.

In that period, the collective interests of the Palestinian “urban upper bourgeoisie” increasingly overlapped with those of the Zionist settlers, due to shared economic objectives. This also contributed to the marginalisation of Palestinian workers and peasants, who found themselves excluded from the new economic structures set up after 1948.

By the early 1970s, Israel’s growing economy was in need of cheap labour. In 1972, the Israeli state issued the so-called “general exit order” which allowed Palestinians to cross into Israel for work. By then the occupied Palestinian economy was struggling and Palestinian workers in the Occupied Territories were in desperate need for employment, as poverty rates had reached new heights under the yoke of the Israeli occupation.

Sadly, the economic desperation made Palestinian workers even more susceptible to exploitation, ready to carry out Israel’s most difficult and physically strenuous jobs, with little pay, no job security and under the harshest of circumstances.

Leaving before dawn to navigate through a series of military checkpoints, often chasing after Israeli employers’ cars in search for work that may last a day, a week, or more, these workers epitomized the depth of Palestinian humiliation.

Allowing Palestinian workers to seek employment in Israel, however, came at a cost, as Palestinians enjoyed few rights and were barred from joining unions or participating in any political activities to improve their work conditions.

The salaries they earned were charged an automatic payment to the Histadrut, which they could not join officially because they were not residents. To ensure that Palestinian workers could never get permanent residency in Israel, the “general exit order” stipulated that between 1am and 5am they must leave Israeli territory.

The depoliticization of Palestinian workers extended to the Occupied Territories as well, as any political dissent, even the mere participation in a protest or the arrest of any family member on political charges, would often result in the cancellation of Israeli work permits.

The growing impoverishment and sense of humiliation among Palestinians directly contributed to the onset of the Palestinian Intifada, the popular uprising of 1987. Although many Palestinian labourers participated in the events of that year, this massive outpouring of popular anger did not manage to end the cycle of their exploitation, but merely changed their exploiters.

The Intifada precipitated the Palestinian-Israeli peace negotiations of the early 1990s and the signing in 1994 of the Oslo Accords between Palestine Liberation Organization (PLO) and Israel. This created a new political apparatus, the Palestinian Authority (PA), which eventually became the largest employer in Palestine.

But the PA was not able to fully function as a state and take the reins of the Palestinian economy. Instead, it came to be sustained by funds from donor countries, which it distributed and withheld according to its factional, political agenda. It quickly came to engage in the type of exploitation of Palestinian workers which Israel had employed for decades.

The PA’s manipulation of jobs and salaries as a way to ensure political allegiance or to punish dissent can be clearly seen in the besieged Gaza Strip. As the PA’s main faction, Fatah, continues to clash with its Hamas rivals in Gaza, Palestinian leader Mahmoud Abbas has repeatedly slashed salaries and altogether denied employment to thousands of struggling Gazans, prompting mass protests.

In fact, Gaza is the perfect illustration of Kanafani’s argument about the three enemies of Palestine. The hardship in the Strip has been engineered by three major players: “the local reactionary leadership [the PA]; the regimes in the Arab states surrounding Palestine [Egypt] and the imperialist-Zionist enemy [Israel]”.

It is as if history continues to repeat itself in all of its sordid details. The colonizing Israelis, the conspiring Arabs and the self-serving Palestinian leaders are still playing the same old game, while Palestinian workers, the overriding class within Palestinian refugee communities, remain the primary target.

The tragedy of the Palestinian workers is perhaps best illustrated by Kanafani’s famous novel, Men in the Sun, which details the tragic journey of three Palestinian men, escaping a refugee camp in Iraq with the hope of finding work in the booming oil industry in neighbouring Kuwait. The three embark on a dangerous journey hidden in a water tank, carrying along “their hopes and ambitions, their misery and despair, their strengths and weaknesses, their past and future”.

Millions of Palestinian workers, exploited refugees seeking an escape from unrelenting misery, are “men and women in the sun”. Ultimately, it will be their own mobilization and resistance – their knocking on the side of the tank – that will defeat the merciless ploys of Palestine’s “three enemies”.