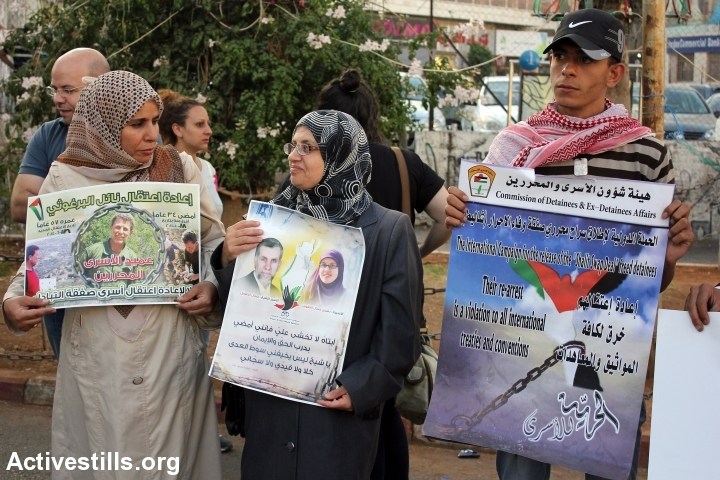 In July 2018, Israeli occupation forces arrested 520 Palestinians from the occupied Palestinian territories, including 69 children, nine women and five journalists, according to Palestinian human rights and prisoners’ institutions that released their monthly report on 13 August. This translation was produced by Samidoun Palestinian Prisoner Solidarity Network.

The Israeli occupation authorities seized 122 Palestinians from the city of Jerusalem, 100 from Ramallah and El-Bireh, 75 from al-Khalil, 52 from Jenin, 48 from Bethlehem, 55 from Nablus, 15 from Tulkarem, 31 from Qalqilya, 7 from Tubas, 8 from Salfit and 8 from Jericho.

As of 31 July 2018, the number of Palestinian prisoners in occupation prisons was approximately 6000, including 53 women, among them three minor girls, while there were approximately 300 children in Israeli occupation prisons. The occupation authorities issued 86 administrative detention orders, 36 of which were new and 50 of which were renewals; the total number of administrative detainees jailed without charge or trial rose to 430.

Fines for child prisoners: Extortion and collective punishment for prisoners and their families

The military occupation courts do not restrict themselves to issuing unfair sentences against child prisoners, but also impose heavy fines on their families, on top of the lengthy years and months of detention. These fines can amount to tens of thousands of shekels for just one person. This is theft in the name of the law and a policy of extorting prisoners’ families with the aim of pressuring the prisoner and the families.

The prison administration also imposes fines for small reasons against the minors inside the prisons, such as being too noisy when calling for prayer, being late to daily roll call, posting pictures on the wall, hanging a clothesline to dry clothes inside the room and similar pretexts.

The imposition of these fines is a form of long-term punishment for the family, obliging families to borrow the money or go without basic needs. In addition, the parents are told that their child is the cause of this debt, despite child prisoners’ arbitrary arrests and regardless of their innocence.

This material extortion against the Palestinian prisoners in Israeli jails is a systematic policy imposed by the occupation to pressure the entire Palestinian society by exploiting its difficult financial situation. This is far from any form of justice or credibility, especially given the dubious reasons for these fines. The aim of the policy is also to relieve the occupation of its material responsibilities toward the prisoners by forcing them to fund their own confinement.

The Israeli occupation authorities carried out a string of arrests targeting five journalists in the month of July.

The Israeli occupation authorities continued their policy of attempting to silence the voices of journalists and violating the rights of freedom of opinion and expression, as the number of journalists in Israeli prisons rose to 23, including four women journalists.

Four of the arrested journalists were Alaa Rimawi, Mohammed Sami Alwan, Hosni Anjas and Qutaiba Hamdan, all from Ramallah and El-Bireh. Alaa Rimawi went on hunger strike for several days in protest of his arrest.

In addition, writer Lama Khater, 42, from al-Khalil governorate, was arrested on 24 July. Lawyers who visited her in detention reported that she was subjected to harsh, continuous interrogation lasting more than 10 hours each day, on the subject of her writings, which interrogators described as “time bombs.” She is a mother of five.

Five Palestinian prisoners and detainees conducted open hunger strikes in Israeli jails during July, including: Anas Shadid, 21, from al-Khalil, who began his hunger strike on 19 July rejecting his administrative detention. The Ofer detention center transferred Shadid to isolation in the Hadarim detention center after he launched his strike. This is the third strike Shadid has carried out in the past two years, one for 90 days in 2016. He has been detained since 22 June 2017 and has been issued three administrative detention orders, all for six month periods, prompting his hunger strike. He refrained from consuming salts or vitamins. During his strike in Hadarim prison, he was held in a small cell with no windows or screens and was very cold. He suffered from nausea and dizziness and fell unconscious on multiple occasions, as well as suffering from pain throughout his body and shortness of breath.

Hassan Shokeh, 30, from Bethlehem, carried out an open hunger strike for more than two months. Arrested on 27 September 2017, this was his sixth arrest. He was seized only 27 days after his last release on 31 August 2017 and ordered to administrative detention for 6 months. Shokeh went on an open hunger strike, which concluded with an agreement that he would be sentenced and released on 3 June 2018. Instead, he was issued a new administrative detention order for six months, accompanied by a claim that new secret material had entered ihis file. He immediately launched a hunger strike in Ofer prison.

He was strip-searched and put in isolation in Ofer prison before being transferred to Hadarim prison for 10 days and then back to Ofer for five days. His lawyer appealed to the Israeli occupation Supreme Court against his administrative detention given the deterioration of his health. His strike ended with an agreement for his release on 1 December 2018.

Bassam Abidu, 47, from al-Khalil governorate, launched a hunger strike on 22 July against his administrative detention. A former prisoner, he spent a total of seven and a half years in Israeli prison. He was rearrested on 30 May 2018 by Israeli occupation forces and ordered jailed without charge or trial under administrative detention. He is married and the father of six children.

In addiiton, Mohammed al-Rimawi, 27, from Ramallah governorate, began an open hunger strike on 19 July in protest of his arrest and the conditions of his interrogation in Ashkelon detention center. He was seized after being summoned for interrogation. A former prisoner jailed previously for three years, his father, Nimr al-Rimawi, was then seized by occupation forces in an attempt to pressure his son to confess.

Dirar Abu Manshar, 40, from al-Khalil, launched a hunger strike on 27 July against his administrative detention. Jailed since 7 June 2017, his imprisonment without charge or trial was renewed three times. He is the father of four children.

Alaa Rimawi, a 40-year-old journalist from Ramallah, began his open hunger strike on 30 July 2018 in rejection of his arrest for journalistic work. He is currently jailed in Ofer prison, and he is married with five children.