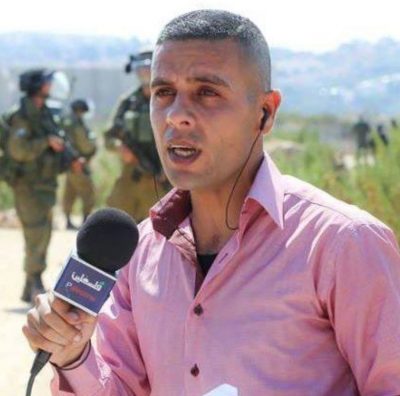 Dozens of Israeli soldiers invaded, on Wednesday at dawn, Borham village, northwest of the central West Bank city of Ramallah, and abducted a prominent Palestinian journalist, a correspondent with Palestine TV.

The Palestinian TV has reported that the soldiers invaded the home of its “military correspondent,” Ali Dar Ali, and violently searched the property before abducting him.

It is worth mentioning that Ali is a well-known journalist in Palestine, especially due to his constant reports from the field, and was frequently assaulted by the soldiers who repeatedly attempted to stop him.

His abduction is part of escalating Israeli violations against Palestinian journalists and media outlets in the occupied West Bank.

Israeli soldiers carried out 31 violations against the journalists in July alone, and arrested several reporters. journalists in the occupied West Bank. There were among 520 Palestinians, abducted by the army in July.