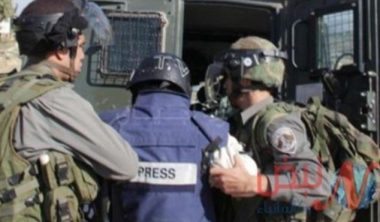 Israeli soldiers abducted, on Monday at dawn, eight Palestinians, including four journalists, from their homes in several parts of the occupied West Bank, after the soldiers invaded and violently searched many homes and buildings, the Palestinian Prisoners’ Society (PPS) has reported.

The PPS office in Bethlehem said the soldiers invaded the city, searched and ransacked a few homes and abducted Ata Tayeh al-Hreimi, 55, and Mohammad Ali al-Mo’ti, 18, in addition to Fahed Monir Abu Swai, 23, from Doha town, west of Bethlehem.

Furthermore, the soldiers invaded Tubas city, in northeastern West Bank, and abducted Mohammad Nasrallah Daraghma, 26, after breaking into his home and searching it.

In Ramallah, in central West Bank, the soldiers invaded and ransacked the homes of four journalists, before abducting them, and illegally confiscated two of their cars in addition to cameras and other equipment they use in their work.

The four have been identified as the head of Al-Aqsa Satellite TV station in the West Bank Ala’ Rimawi, Aqsa TV cameraman Hosni Anjass, correspondent Mohammad Sami Alloush, and reporter Qoteiba Hamdan.

Their abduction by the soldiers brings the number of Palestinian journalists, imprisoned by Israel to 32, including five women.

In related news, the soldiers invaded Masafer Yatta area, south of Hebron, in the southern part of the West Bank, and demolished an agricultural shed, and a residential shed, used by the family of Hussein Zein during the agricultural season in summer.