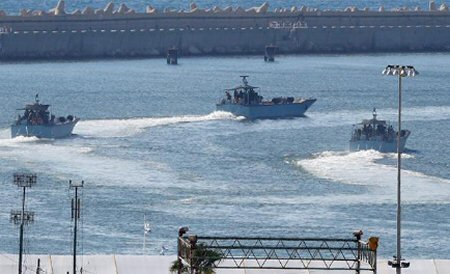 The Israeli navy has intercepted a Norwegian-flagged ship, with activists on board, as it was approaching the shores of the besieged Gaza Strip to deliver humanitarian relief to the inhabitants of the impoverished enclave.

“The activity ended without exceptional events. At this time, the ship is being transferred to the port of Ashdod” along the coast of central Israel, said a statement released by the Israeli military, on Sunday.

The intercepted vessel was one of the four ships that made up the Freedom Flotilla, which intended to break Israel’s nearly 12-year blockade of the Gaza Strip, according to Press TV/Al Ray.

Adham Abu Salima, a spokesperson for Gaza’s National Committee for Breaking the Siege, confirmed the attack by Israeli forces on the Freedom Flotilla ship. He said that the committee had lost contact with the flotilla members. He added that 36 solidarity activists from 15 various countries were on board the vessel, which left the Italian city of Palermo on July 21.

According to the Freedom Flotilla Coalition, a second boat of the flotilla, the Swedish-flagged Freedom, is expected to arrive in the same area in the next couple of days.

Back in late May of 2010, an Israeli raid on the Gaza Freedom Flotilla, comprising six civilian ships, killed 10 Turkish activists in high seas and sent the Ankara-Tel Aviv ties into a tailspin.

Israel’s military raid against the civilian flotilla was met with global condemnation. The United Nations Security Council called for a prompt investigation into the incident and the United Nations Human Rights Council described the attack as “outrageous.”

Many human rights groups also strongly denounced the raid, while dozens of protests were held in support of the victims’ cause in several countries, including Turkey, Indonesia, Lebanon, and Sweden.

In September 2010, Turkey suspended its military ties with Israel and expelled the Israeli envoy from Ankara over Tel Aviv’s refusal to apologize for the killing. Four years later, a criminal court in Turkey issued arrest warrants for four Israeli military officials, deemed by Ankara as the main culprits in the case, and turned over the warrants to Interpol to arrest the suspects, but to no avail.

Turkey and Israel, however, normalized relations in June 2016, after a series of not-very-public negotiations. An agreement to normalize the ties entailed the payment of $20 million, in compensation for the families of the victims.

Additionally, numerous attempts have been made, throughout the years, to draw the public attention to the ongoing siege of Gaza. From 2008 through 2016, international activists have sailed 31 ships and boats, to challenge the Israeli naval blockade.

Gaza, a coastal sliver on the Mediterranean, is where Palestinian resistance movements enjoy massive public support. The territory has seen brutal wars by Israel over the past years, the last one having been in the summer of 2014, when more than 2,200 Palestinians — mostly civilians, and approximately one quarter children — were killed in Israeli raids.

The area continues to suffer from the destruction left behind from the war. Israel continues to prevent the flow of humanitarian aid into Gaza, and the blockade, since its imposition in June 2007, has caused a decline in living standards as well as unprecedented levels of unemployment and poverty.