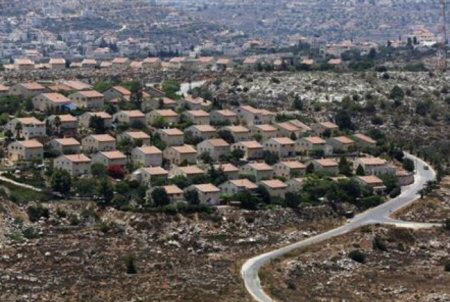 The National Bureau for Defending the Land and Resisting Settlement stated that the Israeli Central Court’s resolution on keeping hundreds of settlement units in the occupied West Bank, under an Israeli judicial procedure called “market regulations,” is a dangerous precedent that retroactively paves the way for the renewal of building settlements, and grants the settlers more incentives to steal more Palestinian lands without punishment.

The central court in Jerusalem’s decision came to ground the settlement outposts of “Mitzpe Kramim”, to reveal once again the reality of the political maneuvers that Israeli PM Benjamin Netanyahu stands behind, to gradually legitimize settlement outposts, recalling the deliberations conducted by the Israeli Supreme Court, several years ago, that revealed the truth of the leadership position which, by all means, intends to plunder Palestinian land. These deliberations have repeatedly confirmed that this is a settlers’ government.

Members of the Knesset and ministers of the Israeli government welcomed the decision of the Central Court in Jerusalem, to settle the settlement outpost of Mitzpe Kramim, under the claim that it was established “in good faith.” Not only was the decision of the Central Court welcomed, but asserted that the high court shall not deal with Palestinian appeals as MK, Nissan Slomiansky of the Jewish House said that the Central Court is worthy of respect because it activated an item that prevented the high court from enforcing any decision.

For his part, Knesset Spokeperson, Yuli Edelstein said that “the determination of the settlers in Mitzpe Kramim has proven itself,” and welcomed the decision of the Central Court, considered it “just” and that it is required to be issued by the court. He also stressed the continuation of strengthening settlement. Moreover, the Central Court clearly proposed that a person who is settled by a State permit can act in good faith that his home will not be evicted, adding that this is a blessed month for settlement, in that the decision of the central court regarding the settlement of Mitzpe Kramim comes after the approval of the establishment of 3 new settlements.

Hebrew media also welcomed the decision, as Hebrew newspaper “Yediot Ahronot” said that the decision to legitimize outpost came under the pressure of the Israeli Minister of Justice, Ayelet Shaked, who praised the judicial decision. The decision of the court will be reflected on the fate of hundreds of settlement units built on private Palestinian land.

Recently, settlers have established an illegal settlement outpost near the settlement of Eli, on the land of the Qariot and Sawiya villages, south of Nablus. Five buildings were erected in the area. The Civil Administration stated that it didn’t have any idea on that. Head of the Settlement Council, Mati Binyamin, said that he also does not know about the settlement.

A tent was also found in the area, and a building likely to be used for housing. A commercial vehicle was seen loaded with furniture. According to Palestinian sources, a group of settlers from the evacuated settlement of Amona set up 5 tents and foundations to construct a sheep-tent on privately owned Palestinian land located between the settlements of Shilo and Eileh.

On the other hand, there is competition between party leaders and public opinion in Israel, which is more supportive of settlement activities, especially as the municipal elections in Jerusalem are drawing nearer. It has been revealed that the work will begin in early September, on a project to build hundreds of settlement units in the heart of the town of Beit Hanina, north of occupied Jerusalem.  Mayor of the occupation in Jerusalem, during a closed political conference said that 124 settlement units, approved by the Planning Committee of the 324, is expected to be built in the heart of the Palestinian town, claiming that the lands on which the settlement will be built were purchased 15 years ago, by Jewish funds, with the aim of creating a series of settlements in Jerusalem.

Israeli Education Minister, Naftali Bennett said that the momentum of settlement construction in West Bank settlements and occupied Jerusalem should continue. He added, in remarks broadcast by the official Israeli Broadcasting Corporation, that “the discourse on the Israeli street has changed so that it is now focused on the application of Israeli sovereignty over the West Bank and Jerusalem, instead of talking about the principle of a two-state solution . In a meeting with settler leaders in the West Bank, on the eve of the Jewish New Year, he said that his party was working through the ruling coalition to expand settlements in the West Bank and raise the number of Jewish settlers to one million, over the coming years. Israeli Defense Minister, Avigdor Lieberman threatened to continue settlement construction in response to continued operations in the West Bank: “Israel will continue to build settlements, in the settlement of Adam, and everywhere.”

In Ras Karkar village, west of Ramallah, the head of the Wall and Settlement resistance committee, Walid Assaf, was injured by a rubber-coated metal bullet, in the ear, during the course of his protest against Israeli soldiers’ attempt to seize the Jabal al-Risan area, to the west of the village. Israeli occupation forces fired rubber-coated bullets at Assaf from a close range, wounding him in the left ear, while two of his bodyguards were wounded in the hand and the back. Two other demonstrators also suffered injuries, along with an Israeli solidarity activist.

In Jerusalem, settlers confiscated accompanied by representatives of the “General Trustee – Custodian of Absentees’ Property”, a private plot of land belonging to Abdul Razaq Sheikh, near his house. The land is about 50 square miles, located in the western part of Sheikh Jarrah neighborhood, where Israelis bulldozed and uprooted fruitful trees, and of which the General Trustee – Custodian of Absentee Property has claimed ownership.