Report: “Israeli Army Kidnapped 471 Palestinians In May, 5805 Since October 1st” 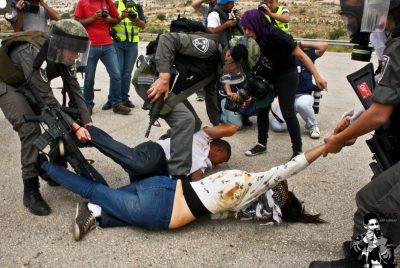 Several Palestinians prisoners support groups have reported that the Israeli army has kidnapped 471 Palestinians in May, and that the number of Palestinians who have been kidnapped since the begging of the current uprising, on October 1st 2015, is 5805.

The Palestinian Prisoners Society (PPS), the Ad-Dameer Prisoners’ Support and Human Rights Association, the al-Mezan Center for Human Rights, and the Palestinian Detainees’ Committee issued a joint report, Thursday, documenting the arbitrary and random Israeli abductions of Palestinians, and the serious violations against them.

The report indicated that the soldiers kidnapped 84 Palestinians, including 20 women (five underage), and one legislator, identified as Abdul-Jaber Foqaha.

It added that the highest abduction rate was in occupied Jerusalem, as the soldiers kidnapped 111 Palestinians, followed by Hebron 80, 61 from Ramallah and al-Biereh District, 48 from Bethlehem, 45 from Nablus, 34 from Jenin, 14 from Qalqilia, 10 from Salfit, 5 from Tubas, 5 from Jericho, in addition to 34 from the Gaza Strip.

The report also stated that the current number of Palestinians, held by Israel, is at least 7000, including 71 women (among them 15 children), seven legislators, in addition to 750 Palestinians, held under arbitrary Administrative Detention, without charges or trial.

As for the Palestinians kidnapped in the Gaza Strip, most of them are fishers, and all faced very harsh treatment and violations, during their arrest and interrogation.

It also stated that at least eight Palestinian detainees initiated hunger strikes in May, protesting the illegal detention and bad treatment.

The report also denounced the procedures used to transport the detainees to courts and even hospitals, as the vehicles they are placed in are made of iron, very hot in summer and extremely cold in winter, while most of them are in those vehicles for up to eight hours, and a total of three days when counting each transfer between different facilities and courts.

Detainee Rami Sabarna, from Hebron, was repeatedly assaulted by the soldiers as they were moving him back to the Ramon prison, after he underwent appendectomy in an Israeli hospital, an issue that caused his wound to reopen and bleed.

The organizations that prepared the report denounced the torture, threats and abuse the detainees, including children, face under interrogation, and during their transfer between different centers, in addition to the threats made by the soldiers to harm their families.

The organizations strongly condemned the serious and escalating Israeli violations, and expressed their solidarity with the detainees facing constant abuse and bad living conditions, and called for local, regional and international human rights groups to intervene and ensure Israel abides by International Law and all principles of human rights.

They also called on the United Nations and the International Community to stop the dangerous Israeli violations, especially its use of torture, cruel treatment and abuse of the detainees, including the violations against children, not only during their arrest but also during interrogation and imprisonment.