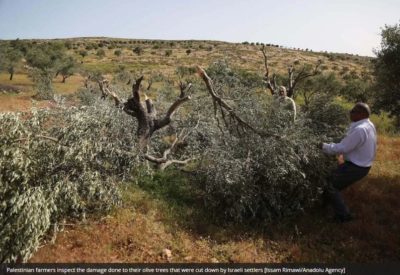 Nearly 1,600 trees have been vandalized by Israeli settlers in the occupied West Bank since the start of 2020, according to United Nations OCHA.

According to the agency’s latest report, during the period 3-16 March, Israeli settlers vandalized at least 385 Palestinian-owned trees and vehicles in the West Bank.

Three such attacks involved settlers cutting down or uprooting some 200 olive trees and 150 grapevines “belonging to farmers from Al Khader and Khallet Sakariya villages that are planted next to the Gush Etzion settlement area (Bethlehem), and 35 olive trees next to Bruchin settlement (Salfit)”.

On top of the numerous incidents of attacks on Palestinian-owned property and livestock, Israeli settlers “physically assaulted and injured three Palestinians”, including a woman, in three separate incidents in Al Auja town and the Israeli-controlled area of Hebron city (H2), in southern West Bank.

“Additional settler attacks not resulting in injuries or damage were reported in the H2 area on 10 and 11 March, during celebrations of a Jewish holiday (Purim),” the UN OCHA report added.

The UN OCHA report is issued once a fortnight, and documents human rights violations by Israeli forces and settlers, and the impact of occupation for Palestinians.

Over the reporting period, UN OCHA documented the punitive demolition of two homes, as well as the demolition or seizing of an additional 14 Palestinian-owned structures on the grounds of a lack of building permits, displacing 29 people and affecting around 60 others.