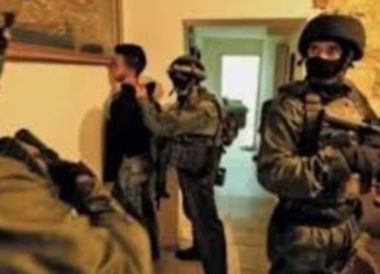 The PPS said the soldiers invaded and ransacked homes in Sniria village, south of Qalqilia, before abducting ‘Ala Sadeq Omar, 38, and Mamdouh al-Barri, 26.

It added that the soldiers also invaded and searched homes in Azzoun town, east of Qalqilia, and abducted Mahmoud Ghannawi, 40.

On Sunday evening, the soldiers abducted five Palestinians, including children, in Jerusalem and Salfit.

The frequent abduction of Palestinian civilians, by Israeli troops in the occupied West Bank, is part of the Israeli policy to crack down on those who reject and resist the decades-long military occupation of the Palestinian territories.

Since the signing of the Oslo peace accords between Israel and the Palestine Liberation Organization (PLO) in 1993, the issue of Palestinian prisoners has remained an integral part of Palestinian-Israeli peace talks.

However, Israel continues to detain Palestinians in the West Bank, as the number of Palestinians, held in Israeli jails, stand at almost 5,0000 including dozens of women and teenagers.