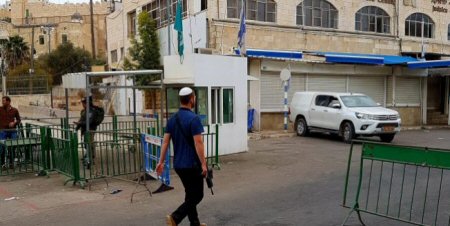 In its latest weekly report about Israeli settlements activities in the occupied West Bank, including Jerusalem, the National Bureau for the Defense of Land stated as follows…

The course of hatred and attacks on the Palestinian people continue and take a more dangerous curve following the formation of more organized and coordinated extremist groups, in the West Bank, that launched calls under the title, “There’s operations, no Arabs.”

Moreover, they called for gathering at road 60, which extends from Hebron to Nablus, in order to prevent Palestinians from using it. In their calls, the settlers wrote to Netanyahu that, if he fails to protect them, they will act themselves. Bit-Eil settlement council head Bin Yashai told Israeli army leaders that he and other settlers would prevent the re-opening of the road.

According to Israeli information and reports, settler attacks on Palestinians classified as hate crimes have increased by 60%, from the previous year of 2017. Data indicate that, in 2017, there were 79 cases of aggression, but 2018 recorded 127 cases, which means approximately one assault every three days, to include the puncturing of car tires, the uprooting of trees, racist slogans painted on walls, physical assault, killing and assaulting animals. The highest number of attacks was recorded in the villages of Nablus, Ramallah and Hebron governorates.

The Israeli army guarantees the protection of settlers, on the streets of the occupied West Bank, with concrete cubes and other obstacles. The army has also reinforced its numbers in several battalions throughout the West Bank, to ensure the maximum protection of the psychological and material rights of settlers. “It is unreasonable to have an operation, and, the next day, waiting to have the same,” said deputy president of the Knesset Israel Yishlar, who called for the duplication of checkpoints by adding 12 new ones.

Thus, the Israeli government has developed a way to punish Palestinians through building more illegal settlements, though violating international law and its resolutions, the latest being resolution 2334 of 2016, which condemns the Israeli settlement policy.

In a related matter, in the city of Hebron in particular, an internal report for the International Monitoring Force found that the city was collapsing under the burden of occupation and settlers, and that Israel is breaking international law, as Palestinians are regularly attacked, their freedom of movement and their right to access places of worship violated.

“Hebron is more divided today than ever before because of the actions of the Israeli government and the settlers.” said the report, which also also stated that Israel is constantly violating Article 49 of the Fourth Geneva Convention, which prohibits the deportation of persons under occupation, and “normal life” is not available anywhere in the city, especially in the Old Town area – located in Area H2. The report indicated violations of road construction on Palestinian-owned land, particularly at the Qiryat Arba settlement in central Hebron, and the destruction of Palestinian homes that were built since the Ottoman period.

The European Union expressed its deep concern over the demolition of a school in the area of Al-Simeya, north of Hebron, in Area C, on December 5th. The European Union, in a statement issued by its representative, said, “This is the 5th time that the Israeli authorities demolish or confiscate school buildings or kindergartens in the West Bank, in 2018.”

The total number of schools, in Area C and East Jerusalem, which have been ordered demolished or left unfinished in them, were 50, which led to the creation of a compelling environment affecting more than 5,000 school children.