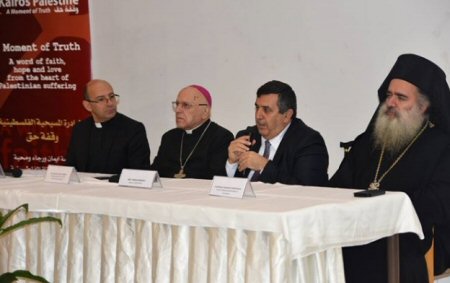 The Kairos Palestine initiative, in its 9th annual statement, has called on the Christian community, in Palestine and in the world, to recognize Israel as an apartheid state, and to end the occupation and end attempts to shift the identity of Jerusalem towards a “Jewish only” policy.

PNN reports that, in a press conference, Kairos leaders assured that the decreasing numbers of Christians in Palestine are a result of Israeli practices of racism, movement restrictions, and suppression, just as it is against the Muslim population, in addition to the economic frustrations and living conditions.

Christian leaders finally assured that Christianity was born in Bethlehem, as it originated with the nativity of Jesus Christ who carried the message of humanity and light to the rest of the world.