Palestinians Have A Legal Right To Armed Struggle 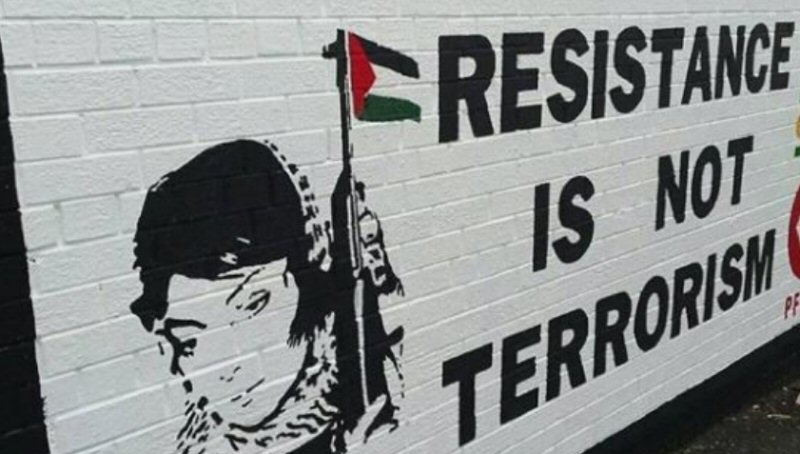 Long ago, it was settled that resistance and even armed struggle against a colonial occupation force is not just recognised under international law but specifically endorsed.

In accordance with international humanitarian law, wars of national liberation have been expressly embraced, through the adoption of Additional Protocol I to the Geneva Conventions of 1949 (pdf), as a protected and essential right of occupied people everywhere.

Finding evolving vitality in humanitarian law, for decades, the General Assembly of the United Nations (UNGA) – once described as the collective conscience of the world – has noted the right of peoples to self-determination, independence and human rights.

Indeed, as early as 1974, resolution 3314 of the UNGA prohibited states from “any military occupation, however temporary”.

In relevant part, the resolution not only went on to affirm the right “to self-determination, freedom and independence […] of peoples forcibly deprived of that right,[…] particularly peoples under colonial and racist regimes or other forms of alien domination” but noted the right of the occupied to “struggle … and to seek and receive support” in that effort.

The term “armed struggle” was implied without precise definition in that resolution and many other early ones that upheld the right of indigenous persons to evict an occupier.

This imprecision was to change on December 3, 1982. At that time UNGA resolution 37/43 removed any doubt or debate over the lawful entitlement of occupied people to resist occupying forces by any and all lawful means. The resolution reaffirmed “the legitimacy of the struggle of peoples for independence, territorial integrity, national unity and liberation from colonial and foreign domination and foreign occupation by all available means, including armed struggle”.

Though Israel has tried, time and time again, to recast the unambiguous intent of this precise resolution – and, thus, place its now half-century-long occupation in the West Bank and Gaza beyond its application – it is an effort worn thin to the point of palpable illusion, by the exacting language of the declaration itself. In relevant part, section 21 of the resolution strongly condemned “the expansionist activities of Israel in the Middle East and the continual bombing of Palestinian civilians, which constitute a serious obstacle to the realization of the self-determination and independence of the Palestinian people.”

Never ones to hesitate in rewriting history, long before the establishment of the United Nations, European Zionists deemed themselves to be an occupied people as they emigrated to Palestine – a land to which any historical connection they had had long since passed through a largely voluntary transit.

Indeed, a full 50 years before the UN spoke of the right of armed struggle as a vehicle of indigenous liberation, European Zionists illegally co-opted the concept as the Irgun, Lehi and other terrorist groups undertook a decade’s long reign of deadly mayhem.

During this time, they slaughtered not only thousands of indigenous Palestinians, but targeted British police and military personnel that had long maintained a colonial presence there.

A history of Zionist attacks

Perhaps, as Israelis sit down to mourn the loss of two of their soldiers who were shot dead this past week in Jerusalem – in what many consider to be a lawful act of resistance –  a visit down memory lane might just place the events in their proper historical context.

Long ago, describing the British as an occupation force in “their homeland”, Zionists targeted British police and military units with ruthless abandon throughout Palestine and elsewhere.

On April 12, 1938, the Irgun murdered two British police officers in a train bombing in Haifa. On August 26, 1939, two British officers were killed by an Irgun landmine in Jerusalem. On February 14, 1944, two British constables were shot dead when they attempted to arrest people for pasting up wall posters in Haifa. On September 27, 1944, more than 100 members of the Irgun attacked four British police stations, injuring hundreds of officers. Two days later, a senior British police officer of the Criminal Intelligence Department was assassinated in Jerusalem.

On November 1, 1945, another police officer was killed as five trains were bombed. On December 27, 1945, seven British officers lost their lives in a bombing on police headquarters in Jerusalem. Between November 9 and 13, 1946, Jewish “underground” members launched a series of landmine and suitcase bomb attacks in railway stations, trains, and streetcars, killing 11 British soldiers and policemen and eight Arab constables.

These are but a few of many attacks directed by Zionist terrorists at British police who were seen, by mostly European Jews, as legitimate targets of a campaign they described as one of liberation against an occupation force.

Throughout this period, Jewish terrorists also undertook countless attacks that spared no part of the British and Palestinian infrastructure. They assaulted British military and police installations, government offices, and ships, often with bombs. They also sabotaged railways, bridges, and oil installations. Dozens of economic targets were attacked, including 20 trains that were damaged or derailed, and five train stations. Numerous attacks were carried out against the oil industry including one, in March 1947, on a Shell oil refinery in Haifa which destroyed some 16,000 tonnes of petroleum.

One attack in particular, sums up the terrorism of those who, without any force of international law at the time, saw no limitation to their efforts to “liberate” a land that they had, largely, only recently emigrated to.

In 1947, the Irgun kidnapped two British Army Intelligence Corps non-commissioned officers and threatened to hang them if death sentences of three of their own members were carried out. When these three Irgun members were executed by hanging, the two British sergeants were hanged in retaliation and their booby-trapped bodies were left in an eucalyptus grove.

In announcing their execution, the Irgun said that the two British soldiers were hanged following their conviction for “criminal anti-Hebrew activities” which included: illegal entry into the Hebrew homeland and membership in a British criminal terrorist organisation – known as the Army of Occupation – which was “responsible for the torture, murder, deportation, and denying the Hebrew people the right to live”. The soldiers were also charged with illegal possession of arms, anti-Jewish spying in civilian clothes, and premeditated hostile designs against the underground (pdf).

Well beyond the territorial confines of Palestine, in late 1946-47, a continuing campaign of terrorism was directed at the British. Acts of sabotage were carried out on British military transportation routes in Germany.  The Lehi also tried, unsuccessfully, to drop a bomb on the House of Commons from a chartered plane flown from France and, in October 1946, bombed the British Embassy, in Rome. A number of other explosive devices were detonated in and around strategic targets in London. Some 21 letter bombs were addressed, at various times, to senior British political figures. Many were intercepted, while others reached their targets but were discovered before they could go off.

The steep price of self-determination

Self-determination is a difficult, costly march for the occupied. In Palestine, no matter what the weapon of choice – whether voice, pen or gun – there is a steep price to be paid for its use.

Today, “speaking truth to power” has become very much a popular mantra of resistance in neoliberal circles and societies. In Palestine, however, for the occupied and oppressed, it is an all-but-certain path to prison or death. Yet, for generations of Palestinians stripped of the very breath that resonates with the feeling of freedom, history teaches there is simply no other choice.

Silence is surrender. To be silent is to betray all those who have come before and all those yet to follow.

For those who have never felt the constant yoke of oppression, or seen it up close, it is a vision beyond comprehension. Occupation sits heavy on the occupied, every day in every way, limiting who you are and what you may dare to become.

The constant rub of barricades, guns, orders, prison and death are fellow travellers for the occupied, whether infants, teens in the spring of life, the elderly, or those trapped by the artificial confines of borders over which they have no control.

To the families of the two Israeli Druze policemen who lost their lives while trying to control a place that was not theirs to command, I extend my condolences. These young men were, however, not lost to the ring of resistance, but willingly sacrificed by an evil occupation that bears no legitimacy whatsoever.

Ultimately, if there is grieving to be done, it must be for the 11 million occupied, whether in Palestine or outside, as so much stateless refugees, stripped of a meaningful voice and opportunity, as the world makes excuses built largely of a political and economic gift box that bears the Star of David.

Not a day goes by now without the chilling wail of a nation watching over a Palestinian infant wrapped in a burial shroud, stripped of life because electricity or transit have become a perverse privilege which holds millions hostage to the political whims of the few. Be they Israeli, Egyptian or those who claim to carry the mantle of Palestinian political leadership, the responsibility of infanticide in Gaza is theirs and theirs alone.

The three young men, cousins, who willingly sacrificed their lives in the attack on the two Israeli officers in Jerusalem, did so not as an empty gesture born of desperation, but rather a personal statement of national pride that follows a long line of others who well understood that the price of freedom can, at times, mean all.

For 70 years, not a day has passed without the loss of young Palestinian women and men who, tragically, found greater dignity and freedom in martyrdom than they did in obedient, passive living controlled by those who dared to dictate the parameters of their lives.

Millions of us, worldwide, dream of a better time and place for Palestinians … free to spread their wings, to soar, to discover who they are and what they wish to become. Until then, I mourn not for the loss of those who stop their flight. Instead, I applaud those who dare to struggle, dare to win – by any means necessary.

There is no magic to resistance and struggle. They transcend time and place and derive their very meaning and ardour in the natural inclination, indeed, drive, of us all to be free – to be free to determine the role of our own lives.

In Palestine, no such freedom exists. In Palestine, international law recognises the fundamental rights to self-determination, freedom and independence for the occupied. In Palestine, that includes the right to armed struggle, if necessary.

Long ago, the famed abolitionist Frederick Douglass, himself a former slave, wrote of struggle. These words resonate no less so today, in Palestine, than they did some 150 years ago in the heart of the Antebellum South of the United States:

“If there is no struggle, there is no progress. Those who profess to favor freedom, and yet depreciate agitation, are men who want crops without plowing up the ground. They want rain without thunder and lightning. They want the ocean without the awful roar of its many waters. This struggle may be a moral one; or it may be a physical one; or it may be both moral and physical; but it must be a struggle. Power concedes nothing without a demand. It never did and it never will.”

Stanley L Cohen is a lawyer and human rights activist who has done extensive work in the Middle East and Africa.

(The views in this article do not necessarily reflect those of the publishers.)

Opinion/Analysis 12/16/18 While Israel Kills, The US Condemns Hamas