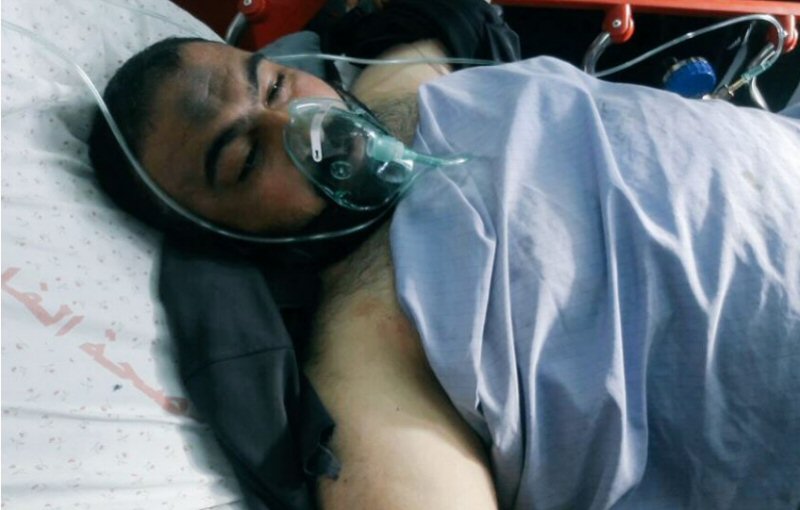 As a Palestinian whose father was displaced from Al-Ramla, I consider taking part in the Great March of Return a duty. As a journalist, regardless of the dangers, reporting on Israeli violations is my job.

On 11 May, I charged my mobile phone, filled my car with petrol, dressed up and headed to partake in the seventh Friday of the Great March of Return along with thousands of civilians in the Gaza Strip. As a Palestinian joining the protests is the norm, but I am also a journalist and reporting on Israeli aggression against peaceful protesters is my duty.

I arrived in the area at around 16:45 when protesters in Gaza city, where I live, came together. The demonstrators were sharing memories and the stories that had been narrated to them by their parents and their grandparents about their homes in historic Palestine, of life before the Nakba of 1948, before the Zionist militias forced the Palestinians out of their homes, villages and cities and the illegal and racist state of Israel was created. 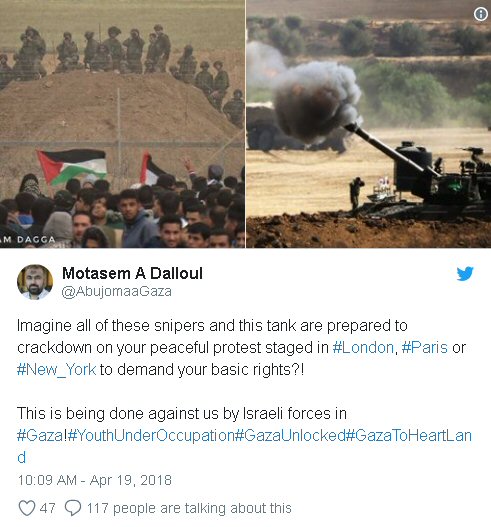 Some of the protesters burnt tyres and others threw stones towards the hundreds of Israeli snipers on the other side of the barbed wire fence the Israeli occupation claims marks the eastern border of Gaza. I can say with certainty that since the start of the Great March of Return none of the stones has come close to or hit a single Israeli sniper. The Israeli snipers are positioned at least 200 metres away from where the Palestinians are protesting, so the stones pose no danger to them at all.

In spite of this, the occupation forces consistently throw gas canisters at the protesters, using automatic launchers fixed to armoured military vehicles or drones to do this. The gas they use is strange and those who inhale it suffer strange symptoms which leave dangerous effects on their bodies.

Something exploded inside my chest

At about 17:00, a group of journalists, all of them wearing bulletproof vests with the word PRESS clearly marked on them, were stationed about 50 metres from the fence. Most were foreigners or reporters of foreign TV channels and newspapers. They took their positions in front of the protesters.

I stood and filmed a kite flying overhead which was being targeted by the Israeli occupation forces through the use of a drone. Suddenly, I felt as if something hit the upper part of the right side of my back and an electric current ran through all over my body. Then, something exploded in my chest. I recognised that I had been shot.

Journalists and protesters rushed to help me. I asked them to bring the paramedics to help and they did. Two paramedics arrived and carried me to an ambulance. They carried me at least 200 metres before reaching the ambulances, which were positioned far from the protesters to remain safe as the Israeli occupation forces have targeted ambulances and medical teams several times during the Great March of Return.

I was taken directly to ICU at Al-Shifa Hospital, where I received treatment without delay, but the lack of appropriate medical equipment led to me being incorrectly diagnosed.

Doctors at first thought the bullet, which penetrated my back, only damaged my lungs. They placed a chest tube and emptied my chest of the blood and air which were filling it and affected my breathing. I got better.

The results of an x-ray showed no signs of a bullet or shrapnel inside my body. The doctors thought my body was clear and decided to discharge me from the operation room.

However, hours later, my condition deteriorated. I could not breath, move or stand up. More x-rays and tests were carried out but with the limited medical equipment in Gaza, doctors could not identify what the problem was.

The next day, a team of five surgeons began an operation to discover what was causing me to be so weak. It was then that I fell unconscious only to wake up five days later.

My brothers explained that apart from damage to my lungs, the bullet had ruptured my diaphragm and almost completely damaged my liver, causing a haemorrhage that filled my stomach with blood. Such injuries, they explained, could have left me dead.

Two days later, I was discharged from the ICU, but remained in the hospital where medical staff tended to my wounds, which were infected. When I asked about the reason why my wounds were infected in spite of being at the hospital, Dr Ata Muftah told me that most patients wounded by Israeli bullets see their wounds get infected and this is possibly because the Israeli military uses poisonous substances.

After a series of tests, the Palestinian MP Ashraf Jumaa, who is a chemist and explosive expert, has found that the Israeli occupation forces use poisonous and infectious explosive bullets. “Such weapons are internationally banned,” he said.

I stayed in hospital for 20 days. Before I left, I asked about the bullet or any shrapnel that had been found in my body, but the doctors said they did not find any.

“We found the entry point of the bullet in the upper part of your back, but we did not find the bullet or any part of it,” Surgeon Ashraf Al-Ashqar told me. “The shrapnel could have dissolved or it could have been a fibre bullet that is not picked up in an x-ray,” he added.

Since the start of the Great March of Return, which started on 30 March, I used more and more social media platforms to show the Israeli aggression against the Palestinians and the injustices the Palestinians suffer under the Israeli occupation to the world. Three weeks after the protests began, on 20 April, a Zionist troll left me a message on Twitter: “Motasem you are a terrorist and we are going to catch you.” 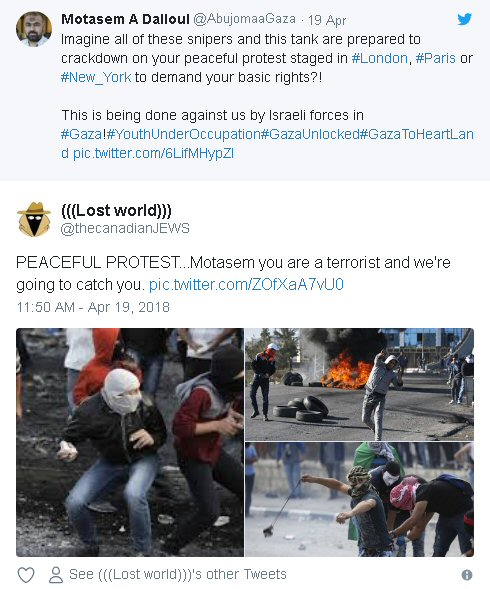 I did not pay much attention to this. I only took a screenshot to the post that the Zionist replied to and to the reply itself and posted them on twitter. The reaction of my followers varied. Some asked me to block him, some advised me to be cautious and some expected it might not be serious.

Just three weeks later, I was picked up and was targeted while in the midst of about 20 journalists. If this was a fulfilment of the threat, then this is yet another crime committed by the Israeli occupation, which has previously attacked and demolished my house several times.