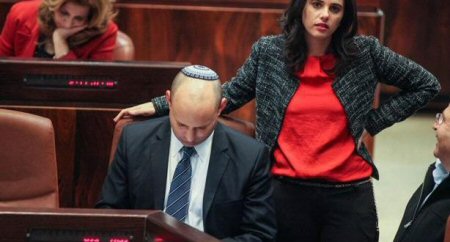 Israel’s judiciary system reportedly did not, and still does not, act in isolation from Israeli political considerations in many stations related to Palestinian lives and the ongoing conflict on the ground, between settlers, the government of Israel and Palestinian citizens.

The judicial system usually intervenes under the direction of the political and security levels to legitimize, here and elsewhere, the confiscation of Palestinian land and its transfer for settlement purposes. Within this context, there is an attempt to politicize the Israeli judiciary to work smoothly, to settle and legitimize more settlement outposts set up by the Israeli government, in the West Bank.

In an interview with Israel’s Ch. 7, Justice Minister Ayelet Shaked revealed Israeli efforts, in the field of law and order, to settle and legitimize settlement outposts in the West Bank.

The Committee for the Appointment of Judges in Israel, headed by Shaked, has now approved the appointment of Bahia Zandberg as a judge In the Central Court of Jerusalem, after serving as chairwoman of the Committee on the Bleaching of Settlements, and who is a close ally of Shaked (Jewish Home Party). Zandberg led two legal campaigns supporting the settlers, which were contrary to the instructions of the Ministry of Justice and the legal adviser to the government, and their positions, and was then appointed to the Public Prosecutor’s Office. Through his appointment, Shaked seeks to consolidate the settlement policy and prevent the evacuation of settlement outposts in the occupied West Bank, including those that are built on private Palestinian land, and not only the so-called “state lands.”

With the transfer of powers to the central court, Zandberg will have the greatest influence on decisions about settlements and outposts, which would increase settlement construction even if the government or the political echelon opposed it. The appointment of Alex Shtain and Ofer Grosskov as judges in the Supreme Court was seen as a victory for Shaked, who supported a number of nominations in various courts. Shaked appointed Esther Hayout as the head of the Supreme Court, under whom judges would not object to the appointment of the judge in the Jerusalem District Court, Yigal Marzel, as head of the court. In her comments on the appointments, Shaked said, “This is the one of the happiest days in the Israeli judiciary.”

PNN further reports that the Israeli government has begun the building of units in the new settlement of Amihai, located near the settlement of Shilo, between Nablus and Ramallah cities. Ameihai settlement is supposed to house 40 families evacuated by Israeli authorities in February of 2017, from the “Amona” settlement near the Ramallah governorate, which was built on private Palestinian land.

The Israeli “Kelvin” company, for excavation works, has put up mobile homes in the new “Amihai” settlement, on the lands of Jaloud village, in Nablus, in basin 16 (also known as Jabal Abu Rokhm), where extremist settlers asked the government to recognize the settlement, following Israeli occupation forces’ evacuation of the Amona outpost.

The new settlement seized agricultural land comprising more than 205 dunams on September 11th, under the pretext of appropriating “State land”. Israeli Interior Minister Aryeh Deri said, earlier, that all obstacles of construction in settlements have been removed, as a budget of more than NIS 40,000,000 was allocated for that. Reports said the Israeli Ministry of Finance would transfer NIS 55,000,000 to the Interior Ministry, to be transferred to the Regional council in the occupied West Bank.

Moreover, Deri gave the green light to Israeli Planning and Construction institutions for the construction of a new settlement near the Qalqilia city, to accommodate more than 20,000 settlers through the four merging settlements of Sh’ari Tekva, Itis Efrim and Elkana within one regional settlement council. “Oranit” will be added, in 2023, to be the large city for settlers.

On the other hand, PM Netanyahu has allocated NIS 60,000,000 to build homes for settlers, who will be evacuated from the “Netiv Haqvot” outpost, to the south of Bethlehem. The Israeli government will evacuate settlers from 15 buildings, from the outposts. Education Minister Naftali Bennett and Justice Minister Shaked visited the outpost and met with the settlers, assuring them that they will work with the government to postpone the evacuation process. In Jerusalem, the Jerusalem Municipality approved a plan to build 3,000 settlement units outside the Green Line, in occupied Jerusalem, on 280 dunams, naming it the “Olive Grove” neighborhood.

In serious statements during a closed-door meeting with the heads of Jewish organizations in North Africa, the US Ambassador to Tel Aviv, David Friedman, explained that the issue of evacuating settlers worries the Israeli government, adding that the military’s leadership is more oriented towards religious Zionism, and that its officers are committed to this land as the land given to them by the God, believing that the eviction could lead to civil war.