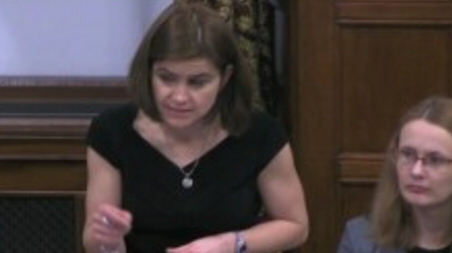 Jo Cox, a devoted compassionate friend of Palestine, refugees and immigrants, an advocate for the plight of Syrian and Yeminite civilians, a genuine working class hero and a mother of two, was murdered today on her way to a constituency meeting.

Jo Cox on the arrest detention and treatment of children in occupied Palestinian territories:

Parliament held an urgent and thought provoking debate this week about the way in which children are arrested, detained and treated in the occupied Palestinian territories, writes Jo Cox.

Westminster Hall, the overspill venue for backbenchers to hold debates when time pressures on the main Chamber won’t allow, was jammed with MPs keen to contribute and listen to what was a fascinating, deeply troubling discussion.

Israel is the only country in the world that systematically prosecutes children in military court and the differences between how Israeli children and Palestinian children are treated are stark. For example, an Israeli child subject to civil court proceedings has to have access to a lawyer within 48 hours. Yet a Palestinian child can be left without legal guidance for as long as 90 days. This, and many other disparities, underline the existence of a two tier justice system operating in the West Bank. One where Israeli children are subject to the rule of law; Palestinian children are not. This disparity of treatment, along with the estimate that 59,000 Palestinian children detained by the Israeli military since 1967 are likely to have been physically abused in one way or another, is deeply disturbing. It is also a clear and fundamental abuse of basic human rights and international law, including the UN Convention on the Rights of the Child.

There are a number of very worrying trends that impact upon these Palestinian children and during the debate I raised the issue that 65 per cent of children report being arrested in what are often ‘terrifying’ night raids by the Israeli military.

Night raids cause a huge amount of distress to children and their families. UNICEF have powerfully argued that “all arrests of children should be conducted during daylight, notwithstanding exceptional and grave situations.” A short lived Israeli pilot scheme, unconvincingly implemented, involved issuing summonses in place of night-time arrests. But these were increasingly served after midnight defeating the intended purpose.

Personal accounts provide an insight to what children are subjected to – they are often arrested in the middle of the night by armed soldiers, their hands are bound, they are blindfolded and taken away on the floor of a military vehicle. There are also reports of them being subjected to physical and verbal abuse throughout.

Another worrying trend is that almost three quarters of children detained report not being informed of their right to silence, the fundamental right afforded anyone arrested on suspicion of a crime. This is to stop the risk of self-incrimination, a particular concern for vulnerable children.  One case documented by the organisation Military Court Watch shockingly reported that a Palestinian child was told by one interrogator that he had the right to silence while a second told him he would be raped if he did not confess.

Thirdly, the issue of transferring detainees en masse from occupied territory is a very serious issue, and is, in fact, a war crime. Yet monthly data released by the Israeli Prison Service shows that almost half of the detained Palestinian children from the West Bank are transferred to prisons inside Israel.

This is a breach of the Geneva Convention. The added human impact is that these unlawful transfers mean families struggle to visit their children often over many months.

Estimates put the number of Palestinians detained since 1967 at 850,0000. Of these almost 100,000 are children. Between 500 and 700 children are prosecuted each year, with stone throwing the most common charge. This often brings with it a sentence of between 10 and 20 years.

These abuses have been going on for nearly 50 years. As my colleague Sarah Champion MP, who sponsored the debate, said – this situation requires decisive action to ensure we meet our international legal obligations.