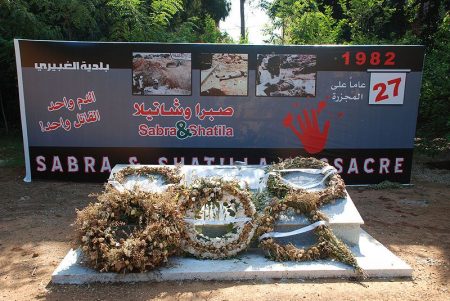 Marking 34 years since the 1982 massacre of Palestinian civilians in the Sabra and Shatila refugee camps of Beirut, Lebanon, Saeb Erekat, secretary general of the Palestine Liberation Organization (PLO), says that the victims are still awaiting justice:

“Thirty-four years ago an Israeli general, Ariel Sharon, violated an Israeli obligation not to enter West Beirut and facilitated the barbaric massacre of hundreds of Palestinian refugees that were under his control,” said Erekat in a statement published on Friday.

“Instead of being held accountable, Sharon was even promoted to become Israel’s Prime Minister. He passed away two years ago without ever facing justice for his heinous crimes.”

Erekat stressed that the massacre of Sabra and Shatila “is a symbol of the Palestinian exile.”

He continued: “Over the past few years, Palestinian refugees have also been persecuted and killed in Iraq and Syria. Resolving the plight of Palestinian refugees, in accordance with international law and UN resolution 194, is of vital importance for our region.”

Erekat said, according to WAFA correspondence, that Israel was accepted as a United Nations member under the commitment to honor partition of Palestine resolution 181 and right of return of refugees resolution 194, as well as the UN Charter.

However, “to date, the international community has failed to honor Palestinian rights, let alone to hold Israel accountable for its violations and crimes against the land and people of Palestine,” he said.

“Sabra and Shatila is a reminder of the importance to make justice prevail over impunity,” concluded the PLO official.

Archive IMEMC interview — 09/17/15 Ellen Siegel: Why have the killers of Sabra and Shatila escaped justice?