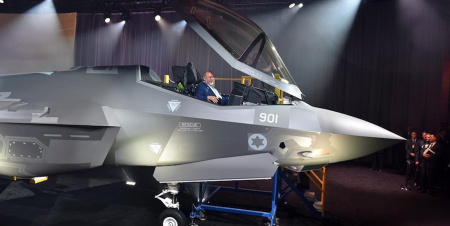 The deal guarantees Israel $10 million a day in U.S. military aid for the next decade. (Photo: Israeli Minister of Defence, Avigdor Lieberman)

The United States and Israel have agreed upon a new military aid package of $38 billion over 10 years.

A total of $5 billion are earmarked for Israel’s missile defense system, while the remaining $33 billion are for what the White House calls “military financing funds.”

The deal, called the Memorandum of Understanding (MoU) is the single largest pledge of military assistance to any country in U.S. history.

When the agreement comes into affect in 2018, each year for the next ten years, the U.S. will disperse $3.3 billion a year to Israel in foreign military financing, as well as another $500 million in missile defense funding.

The new agreement will support the Israeli military and its illegal occupation to the tune of $10 million per day. The fact that this sum includes a budget for missile defense spending has led some to argue that it does not represent a significant increase in U.S. military aid to Israel.

According to a fact sheet released by the Office of the Press Secretary of the White House, the MoU “in practical terms” will update “the lion’s share” of Israel’s fighter aircraft fleet, “increase” its missile defense, and allow Israel to “acquire other defense capabilities.”

Obama discussed the agreement in a statement released by the Office of the Press of the White House: “The new 10 year Memorandum of Understanding on security assistance… is just the most recent reflection of my steadfast commitment to the security of the State of Israel.”

Israeli Prime Minister Benjamin Netanyahu initially lobbied for receiving as much as $4.5 billion a year from the U.S. in military aid before agreeing to several small “concessions” — most of which scratch the back of the U.S. arms industry.

But, upon the agreement’s passing, Netanyahu ultimately “thanked” the U.S. for its support and told Israeli citizens that they “can be rightly proud of” the deal.

“Many in the U.S. understand that investment in the security of Israel strengthens the stability of the unstable Middle East and serves not only our security interests but those of the United States as well,” he added.

According to the new agreement, Israel must stop using 26.3% of U.S. military funding to buy Israeli arms. It must also stop directing 14% of U.S. funds to purchase fuel for its military.

These changes mean that Israel “will spend more funding, as much as $1.2 billion per year, on the advanced military capacities that only the United States can provide,” said the Office of the Press Secretary of the White House.

Congress must still formally approve the funding’s dispersal to Israel every year, but, it has done so enthusiastically, in the past. Israel is already the largest recipient of U.S. military aid, which regularly represents over 50% of all U.S. foreign military financing.

Yousef Munayyer, the executive director of the U.S. Campaign to End the Occupation, told the New York Times that, with this agreement, “we are helping the Israelis sustain the costs of occupation we claim is unsustainable.”

In a statement, Rebecca Vilkomerson, the executive director of Jewish Voices for Peace, said:

“The United States is once again committing to a decade of increased military aid to Israel, despite that country’s deplorable human rights record. The main beneficiaries of this unprecedented amount of aid will be not just the Israeli military, but also the U.S. arms industry… increasing the military aid package is rewarding destructive Israeli behavior that violates longstanding official U.S. policy and international law. As a result, the U.S. is effectively underwriting Israel’s occupation and apartheid policies towards the Palestinians.”