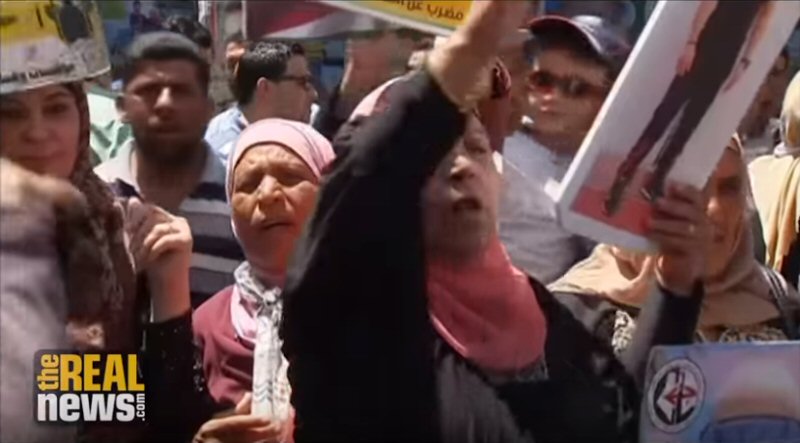 Sahar Francis of the Addameer Prisoner Support Association talks about what the Palestinian detainees’ hunger strike achieved, and explains why strike leader Marwan Barghouti says that it could resume if the agreement is violated.

Aaron Mate: It’s The Real News, I’m Aaron Mate. The Palestinian prisoner hunger strike has been suspended after 40 days. The strike began April 17th, the annual Palestinian Prisoners Day. Over 1500 Palestinian prisoners took part, consuming only water and salt. It ended after Palestinians said at least some of their demands were met, including increased family visits. Israel denies it negotiated with the prisoners and says arrangements were made through the Red Cross. The imprisoned Palestinian politician, Marwan Barghouti, led the strike, and he says it will resume unless the prisoners’ demands are respected. Joining me is Sahar Francis, General Director of the Ramallah based, Addameer Prisoner Support and Human Rights Association. Sahar, welcome.

Aaron Mate: Thank you for joining us. As I said, the strike has been suspended. Can you clarify where things are at right now? Because Marwan Barghouti as I also said, has threatened to resume it.

Aaron Mate: In terms of what those daily demands are, can you talk about the context in which this hunger strike took place?

Sahar Francis: Of course, when they started, the most alerting issues that they were demanding, the family visits issue and lifting all the restrictions that the family visits are subjected to. The solitary confinement used as a punishment, the [inaudible 00:02:33] detention issue. The other punishments that these prisoners face on the daily level, the education that is restricted, and actually banned since 2012, and educational stuff. Other demands that are related to the health conditions, and the health conditions inside the prisons. The health treatment, the lack of health treatment, and so on. Last week when they decided to suspend their hunger strike, actually their statement was including that they agreed on several things, starting from the family visits issue that of course, it’s an issue for the Red Cross committee, but as well, they were discussing the security restrictions, that hundreds of family members are banned from family visits because of these security restrictions. The family visits for families from Gaza, that is limited, and not on the regular basis. Life conditions and healthcare, and so on. They composed a committee that will follow the other demands and keep negotiating with the prison system, and it would come later when we start to visit normally, and get the information from the prisons whether these demands are really respected and implemented already or not.

Aaron Mate: Israel’s claims that it did not directly negotiate with the prisoners, is that true?

Sahar Francis: Of course the Israeli prison system, and especially the Minister of Interior Security that always claims that they will not accept the demands of the prisoners, and they called them, “These are terrorist people. We are not going to take the pressure from their side” but actually, at the end, we are quite sure that the negotiations included of course representatives from the security section of the prison system, as well the Israeli Security Service, and representatives of course of the prisoners, including Marwan Barghouti himself. Also, representatives from the Palestinian security side.

Sahar Francis: Yes, of course. This was always the Israeli policy since Oslo and maybe before Oslo. Some of the prisoners who were released in negotiations also in the ’80s were rearrested in the second [inaudible 00:05:33]. After the Oslo agreement, actually, the Israeli side were always using this rearrest issue in order to put pressure on the Palestinian leadership, and the Palestinian political parties. More than 62 of the Palestinian prisoners who were released actually in 2011, in the Shalit exchange deal, they were rearrested and they were subjected to get back the life sentences that all the other remaining sentences that they were released from.This is based on an amendment for the military order, Article 186, that the Israeli Military Governor did in 2010, in the middle of the negotiations, without announcing actually about this change in the military orders, which enabled the Israelis to rearrest these people based on secret information, without any need to prove any new activities or any new crime, that these people committed. It’s enough to claim that you were not respecting the conditions of their release, and this is the reason for the rearrest. Of course, the Israeli side are very aware about the importance of the prisoners issue, and that any Palestinian party, and especially the PA will never negotiate without including the issue of the prisoners. This is why they manipulate and use the prisoners as bargaining chips, actually.

Aaron Mate: Okay. On that point about the Palestinian prisoner issue being so important to Palestinian society, can you talk about what impact this prison strike has had on Palestinian society? You have Gaza ruled by Hamas, the West Bank ruled by Ramallah, but you saw a mass outpouring of support from pretty much everybody for the prisoners. In terms of the strike being successful, does it maybe have implications for where the Palestinian resistance goes from here?

Sahar Francis: Exactly. I think the Palestinian prisoners case is the uniting issue in the Palestinian society. Whether you’re from Fatah or Hamas, or any other political party, we all unite about the prisoners case, and especially when they initiate a hunger strike. Then, the level of [soldarity 00:08:04] in the Palestinian society increase. This is what we experienced in the last two months, that there was much activism on the street, and this is the hope, that part of actually the message through the hunger strike, coming from the prisoners themselves, asking for unity and asking for Palestinian society to go back, to find a creative way of resisting, because we are still suffering from the occupation. It seems after 24 years of negotiations, this occupation is not going to end soon.This is kind of message to rethink for the political leadership, definitely from all political parties, to rethink about the Palestinian strategies in this struggle against the occupation.

Aaron Mate: Sahar Francis is General Director of the Ramallah based, Addameer Prisoner Support and Human Rights Association. Sahar, thank you so much.

Aaron Mate: And thank you for joining us on The Real News.