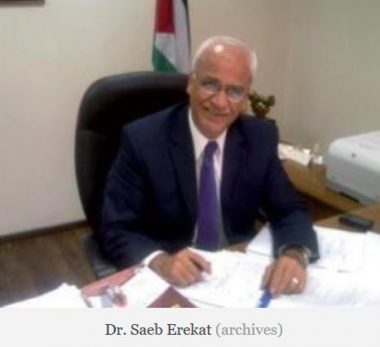 In a statement released by the PLO negotiations Affairs Department on June 4, 2017, Dr. Saeb Erekat notes that “We are marking 50 years since a deliberate Israeli attack resulted in Israel occupying the 22% of historic Palestine that had been left since  1948″.

He added that it was clear since then that, what Israel wanted was not a “temporary occupation”, but a colonial settlement strategy aimed at taking as much as Palestinian land and natural resources as possible. In defiance of its obligations under International Law and UN resolutions, Israel has strengthened its colonial policies for the past 50 years. Erekat added:

“For the Palestinian people, marking 50 years of occupation means marking 50 years of oppression, subjugation and daily control over all aspects of people’s lives. It means 50 years of attacks and aggression from occupation forces and settlers against a defenseless civilian population. At the same time, it has also meant 50 years of statements and international resolutions that Israel, the occupying power, has insisted on violating with impunity . … As we mark 50 years, there are a number of countries that continue to reward the Israeli occupation of our land: They trade with Israeli settlements, their companies profit from the Israeli colonial settlement enterprise and are engaged in an agenda of strengthening relations with Israel. At the same time, Tel Aviv systematically denies our basic rights, including the right to freedom and self-determination.”

Commenting on the role the international system, or rather the United Nations has played in the Israeli – Palestinian discourse, the PLO Secretary General stressed that:

“It is long overdue to implement UNSC resolutions, including 2334 regarding Israeli settlements. It is also overdue for countries who haven’t recognized the State of Palestine on the 1967 border to do so. How is it that countries which condemn settlements continue to trade with them: We demand a full ban on Israeli settlement products and we call upon the UN to publish as soon as possible the list of companies profiting from the Israeli colonial occupation of our country. … We are not simply calling upon the international community to take action: We are demanding from each member of the international community to assume its legal responsibilities and stop cooperating with the Israeli occupation: We don’t want another 50 years of impunity and complicity with the systematic denial of our rights. Israeli policies to destroy the two-state solution will not be met with the disappearance of our rights, rather they will be met with more resilience from our people who will remain steadfast towards the fulfillment of their rights. Our people will defeat Apartheid.”

Ironically, non of the self-anointed five permanent UN Security Council members, China, France, Russia, United Kingdom, and the United States of America, has ever implemented a set of sanctions against Israel over its non-compliance, that would be comparable with sanctions imposed against a cohort of other UN member states, for less severe and less protracted violations.

Republication of articles does not imply that we agree with media’s editorial policy. nsnbc international is free to read and free to subscribe to. We appreciate and depend on modest donations from our regular readers; such as the equivalent of the price of one print newspaper per month.