Art as a Form of Nonviolent Resistance: Palestine (2/2) 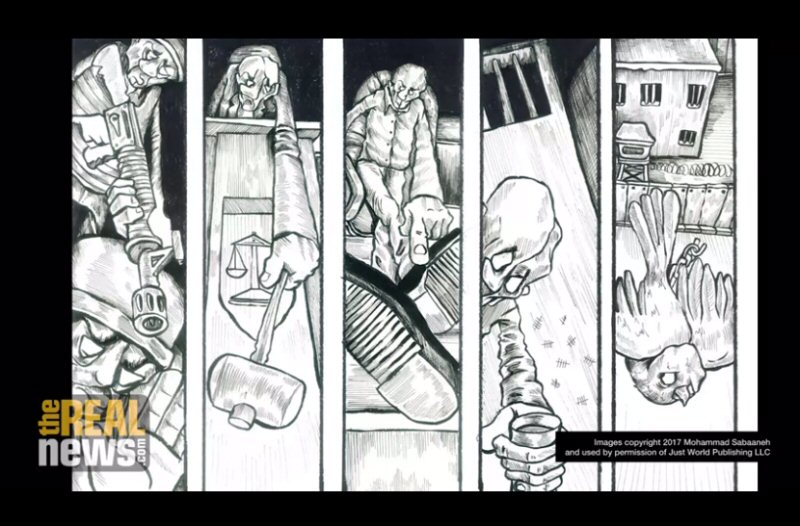 Political cartoonist Mohammad Saba’aneh talks about the Palestinian  hunger strike, resistance, BDS, and the role that art and political cartoons play in the resistance to the Israeli occupation.

Sharmini Peries: Welcome back to my interview with Mohammad Sabaaneh. He is a political cartoonist, and he has just published this new book White and Black: Political Cartoons from Palestine. Mohammad, thank you again for joining me.

Sharmini Peries: Mohammad, in segment one, we were discussing Donald Trump’s visit to Israel. We also were talking about the political prisoners that are on a hunger strike in prison and the nature of their resistance. We were talking about not only are they fighting for better conditions, more visits, ability to improve their conditions while in prison, but they’re not just criminals in there. They’re actually political prisoners who are a part of a movement who are struggling for liberation and freedom.

Now, we also mentioned that President Trump actually may not even know that that is actually going on in Israel or Palestine. I cannot imagine him not knowing given that there has been quite a bit of coverage. But one of the interesting things is that Mahmoud Abbas was just here in Washington as well, and he was here talking to President Trump prior to his visit, and now President Trump is visiting Israel. He must be aware of these demands that the prisoners are making. One cannot actually follow Israel, Palestine at this time and not know about it. Do you think that it’s a deliberate omission not to acknowledge it, and will Abbas actually bring up this issue when he is discussing or meeting President Trump this week?

Mohammad Sabaaneh: I hope he will do it because it will be a great pressure on Israel to accept the demands of the Palestinian prisoner. This is, I think, his role, and this is his duty to tell Mr. Trump about what’s happening inside the Israeli prison. I hope that, but I don’t know if it will happen or not. He’d been here on the 1st of May. Actually, I was in D.C. also. I don’t know if he tell him about the Palestinian prisoner or not, but now-

Mohammad Sabaaneh: Yeah. He has another chance to … From his visit to D.C. until now, Trump visited the region, and the Palestinian was on hunger strike and still on this hunger strike. I think this is his duty now, to tell him what’s happening there.

Sharmini Peries: As we speak, there is a cultural festival going on in Ramallah. Even in my introduction, I mentioned the fact that Palestine is unique in terms of the kinds of forms of resistance that are being used in art as a very unique part of that. You’re a critical figure in that, not only in terms of this publication, but your work comes out daily in newspapers and portray the struggle that’s going on. Do you feel that your collective work is having an impact?

Mohammad Sabaaneh: Yeah. Sure. Unfortunately, but you can see the reaction from the Israeli government and supporter for Israel as an impact from my cartoon. They refused my cartoon, and they always attack me and attack my friends as a cartoonist because we are doing this cartoon. This is something very important because they feel that the cartoon is something very important. You know what’s happened with Naji al-Ali as a Palestinian cartoonist, what’s happened with Ghassan Kanafani, and a lot of Palestinian creative during all of the Palestinian history. I know that the cartoon is very important tools to resist against the occupation and to raise the awareness for the people around the world about what’s happening in Palestine. I choose this kind of art because I know how much it’s very important kind of art to resist, and we have a huge legacy from the Naji al-Ali cartoonist, and we should keep work in the same school, at the same way to fight against the occupation and to resist, to have our freedom in our homeland.

I had another way to respond on this cartoon. I invited all of the Muslim cartoonists whose belief on that. This is something not to criticize the cartoonist or the cartoon about the Prophet Muhammad or about the Islam. If you believe that Islam is … Any religion, it’s an ideas you should fight for this idea by idea. You should explain what is the Islam, what is the value of the Prophet Muhammad by the cartoon. This is our way, as a cartoonist and, I think, as a Muslim and as a human being to fight the idea by idea, to fight the cartoon by a cartoon. That’s our way, and that’s our tools.

Sharmini Peries: Mohammad, much of your work is dedicated to the BDS Movement. That’s the Boycott, Divestment and Sanctions Movement that’s been very successful in many parts of the world. It’s so successful that the Israeli government is also launching a huge attack on the BDS Movement, lobbying universities, states, and country by country to make sure that they don’t support any feature of the Boycott, Divestment and Sanctions Movement. But you are having a great deal of success, and you’re focusing in on particular products made in Israel in your artwork so that people can relate to those products when they see your cartoons. Tell us more about that movement.

Mohammad Sabaaneh: The same thing because I feel that the cartoon is something very effective for the people, and the people like it, and I hope I can help to boycott Israel by my cartoon. I should mention that last year, a lot of Israeli cartoonists launched a campaign against BDS, and they exhibit their work, and the Israeli president opening this exhibition because they believe the cartoon is a good tools.

As Palestinian, we have a great legacy as cartoonists. We should also work on the cartoon, but I don’t think we will have the same support, the Israeli president open their exhibition, and because I believe in the BDS as a way to resist against the occupation, not just in Palestine. Also, around the world, I did a lot of cartoons to support them and to clarify what’s the idea of the boycott of Israel. I don’t know why most of the governments around the world now, they are against the BDS Movement. It’s an army tool to resist against the occupation. If you prevent them to draw or to boycott or do anything, they will go to the armed resistance around the world also. This is a good tools, and I believe in this way, and that’s why I did this cartoon.

Sharmini Peries: All right. Mohammad, I wish you a lot of luck with this book titled White and Black: Political Cartoons from Palestine. You’re on a book tour, and I hope you, the listeners, get to see his work and his talks in some way, and I hope that this interview has contributed to promoting this book. I thank you.

Sharmini Peries: And thank you for joining us here on The Real News Network.