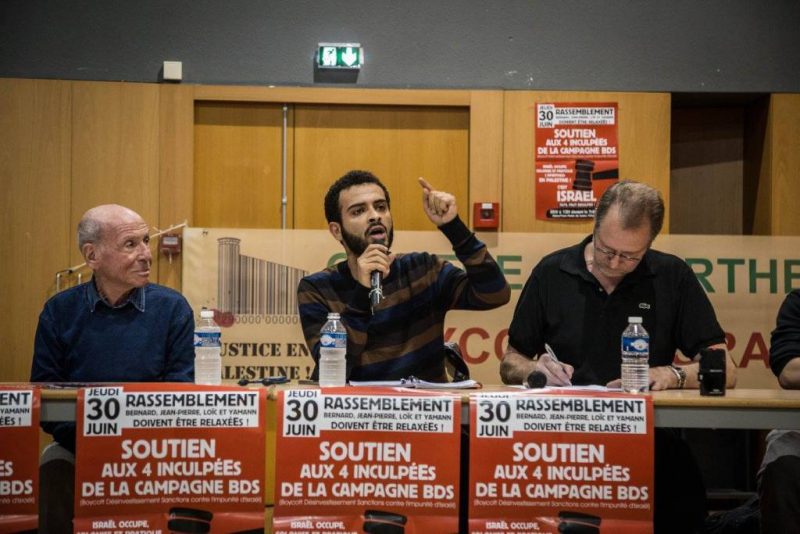 Palestinian organizer Mohammed Khatib, the Europe coordinator of Samidoun Palestinian Prisoner Solidarity Network, was denied a visa to the United States, where he had been invited to speak at the Jewish Voice for Peace National Membership Meeting, which took place in Chicago from 31 March to 2 April. Along with Black4Palestine organizer Kristian Davis Bailey, Mohammed is working on a project to build Black-Palestinian transnational solidarity between liberation movements, focusing on youth organizing.

Additional events in the United States, focusing on Palestinian political prisoners, the struggle for justice in Palestine, Black/Palestinian transnational organizing and liberation struggle and the struggle of refugees – from the urgent need to fight racism in Europe today to Palestinian refugees’ right to return – were also being planned for Mohammed.

Mohammed is himself a Palestinian refugee from Ein el-Helweh refugee camp in Lebanon. A Convention-recognized refugee, the mere sight of his Belgium-issued refugee travel document led visa processing staff members at the U.S. Embassy in Athens, Greece to deny his travel to the US, rejecting even a review of his invitation letters and travel program scheduled in the United States.

As Davis Bailey spoke at the JVP plenary on Sunday, 2 April, he said:

I would like to start by bringing into the room my dear friend and comrade Mohammed Khatib, who was scheduled to join us in person on this panel. Mohammed is the European coordinator of the Samidoun Palestinian Prisoner Solidarity Network and a Palestinian refugee from Lebanon. It is explicitly because of his status as a refugee that he was refused the opportunity to even interview for a visa to the US. “There is nowhere to deport you to,” the embassy told him.

This would have been Mohammed’s first time to the US and he was very eager to engage the membership of Jewish Voice for Peace as a refugee in exile, and as a descendant of survivors of the Nakba. He was subject to the double violence of being denied access to his homeland by Israel and being denied the ability to travel because of his status as a refugee by the US.

Next year marks 70 years since the Nakba. As a solidarity movement we have to take seriously that the majority of Palestinians are refugees in exile and that the end of the occupation or even creation of a Palestinian state does not resolve the fundamental injustice they experienced. We need broad and massive commemorations of the Nabka and to expose the crimes and outcome of the Nakba as the fundamental root of this conflict. We need campaigns and demonstrations to end Israel’s “Palestinian ban” with the same amount of fervor as we rallied at airports against the US’s “Muslim ban.” We cannot abandon the right of return.

The denial of Mohammed Khatib’s visa is, of course, not at all an individual case, but part and parcel of long-time United States policies of ideological exclusion and racist profiling as well as refusal to recognize the rights of refugees. Palestinians traveling to the United States for public events or speaking tours have long faced the threat and the reality of visa denial based on ideological exclusion or racist categories of “suspicion.” The recent intensification of the “Muslim Ban” and promotion of anti-refugee, anti-Arab and anti-Muslim propaganda in order to justify the exclusion of peoples – often not people coming for events or speaking engagements, but people being denied access to their families, their education or simply a place of refuge from war and occupation – only underlines this ongoing and long-term policy of exclusion and deportation.

Of course, this form of racist exclusion is also part and parcel of the U.S.’s imperial invasions, occupations and policies of hegemony and domination around the world. U.S. support for Israeli apartheid and colonization in Palestine comes hand in hand with its destruction, bombing and invasion of countries throughout the region. This year, we are marking the 14th anniversary of only the most recent U.S. invasion of Iraq and the intense misery and devastation it has unleashed upon the Iraqi people, as the U.S. bombs Syria, arms and applauds the destruction of Yemen and threatens war with Iran. Policies of exclusion are operating hand in hand with those of exploitation and destruction.

The denial of a visa to Mohammed also represents the blows suffered by the growing U.S. movement for justice in Palestine due to the constant barriers erected by the U.S., Israeli and other states designed to prevent interaction among Palestinians across national borders, and between Palestinian, Arab and international movements for justice and liberation, from denial of entry to deportation to so-called “anti-terror” laws that terrorize communities and movements. While Skype and video links allow communication to continue across borders, they are not a replacement for the benefit of face-to-face interaction and movement-building.

Samidoun Palestinian Prisoner Solidarity Network denounces the denial of a visa to Mohammed Khatib, as part and parcel of the racist U.S. visa and entry policy that has impacted millions of people around the world – not only since the beginning of the Trump administration, but as a long-term policy stretching over decades. This visa denial is far from an individual case and represents an ongoing aspect of a policy of racism, ideological exclusion and separation and fragmentation of Palestinians from one another and from their national liberation movement.

Mohammed Khatib is available for Skype discussions or video presentations to organizations in the United States and elsewhere who would like to hear his perspective on the Palestinian struggle today, Palestinian political prisoners and Black/Palestinian solidarity. To arrange a video presentation, please email samidoun@samidoun.netor contact us on Facebook.