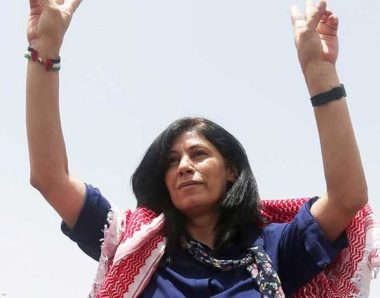 Samidoun Palestinian Prisoner Solidarity Network salutes Khalida Jarrar, her family and loved ones, her comrades, and the Palestinian people on the occasion of her release from two years of unjust imprisonment in Israeli occupation jails. The moment of her release is one of joy for everyone around the world who supports the just cause of the Palestinian people and the international movement for liberation and justice. Today, her steadfastness, strength and leadership must give us occasion not only to celebrate her return home but to redouble our efforts for Palestinian liberation and return.

Of course, our celebration today comes alongside honor and mourning for the five Palestinian lives taken by the Israeli occupation today as they resisted assassination and arrest raids: Ahmad Zahran, Mahmoud Hmaidan, Osama Sobh, Mohammed Sobh and Zakaria Badwan. These martyrs resisted the theft and colonization of Palestinian land and lives until their last breath.

Jarrar, the Palestinian political leader, feminist and parliamentarian, was arrested by Israeli occupation forces on 1 November 2019, only eight months after her release from 20 months in Israeli administrative detention – imprisonment without charge or trial – after her last arrest by occupation forces in 2017. During her detention from 2017 to 2019, over 275 organizations signed onto an international call for her release. The 2019 attack by Israeli occupation forces also came as she prepared to teach at Bir Zeit University on international law and the Palestinian movement, the forced cancellation of her class accompanying the targeting of students for their own political and student activity on campus.

In 2014, she resisted – and defeated – an Israeli attempt to forcibly displace her from her family home in el-Bireh to Jericho. Only nine months later, in April 2015, she was seized by Israeli occupation forces and ordered to administrative detention, imprisonment without charge or trial. After a global outcry, she was brought before Israeli military courts and faced 12 charges based on her political activity, from giving speeches to attending events in support of Palestinian prisoners. She served 15 months in Israeli prison – and was then free for only 13 months before her 2017 arrest.

During the 2 years of Khalida Jarrar’s imprisonment, the Palestinian people witnessed the attempt to impose the so-called “deal of the century” through normalization campaigns led by the U.S. in partnership with reactionary Arab regimes; the repeated bombardment and siege on Gaza; the COVID-19 pandemic and its Palestinian and global effects; the uprising of Palestinians from the river to the sea and inside and outside Palestine in May 2021 alongside the Seif al-Quds battle; the self-liberation of six Palestinian prisoners with the tools they could fashion by hand, exposing the false veneer of invincibility of the Israeli occupation. Throughout all of this, Khalida remained locked behind Israeli bars, an attempt to deny the Palestinian people and the global movement access to her leadership, thought, and action.

Of course, Khalida Jarrar was also kept from her family and loved ones, despite personal tragedy. On 11 July 2021, Khalida’s beloved ​_daughter, Suha Ghassan Jarrar,  a committed Palestinian human rights defender who worked with Al-Haq and spoke around the world, defending and upholding Palestinian rights and liberation,died suddenly of a heart attack at the age of 30. While hundreds of Palestinians joined her funeral procession in Ramallah, Suha’s mother was denied early release for her funeral or even the ability to see her daughter’s body before she was buried.

Thousands of Palestinians and supporters around the world spoke up, campaigned on social media,signed petitions, demanded their governments take action and expressed their outrage at the denial of this basic human right and comfort to Khalida Jarrar and her family by the Israeli occupation. Khalida represented a Palestinian political leader as well as a Palestinian mother, continuing to resist the Israeli occupation amid devastating pain.

Jarrar is a member of the Palestinian committee that acceded to the Rome Statute of the International Criminal Court and presented ​_evidence to the international body about ongoing Israeli crimes. Israeli occupation forces invaded her home just as the Chief Prosecutor of the International Criminal Court announced that she recommended the ICC launch a formal investigation of Israeli war crimes and crimes against humanity in Palestine. She was sentenced only weeks after the ICC affirmed its jurisdiction over occupied Palestine over the objections of the Israeli occupation as well as its backers among imperialist powers. In fact, her 2015 arrest came literally one day after Palestine’s accession to the ICC.

Despite all of the political arrests, ongoing persecution and attempts to silence Khalida Jarrar, the occupation was never able to break her will or her commitment to the freedom of Palestine and its people. On this occasion, we urge all friends of Palestine to join us in celebration — and in outrage — through action: sharing the stories, images and struggles of Palestinian political prisoners, building the boycott of Israel, and organizing together for a day when the prison bars in Palestine and around the world will be pulled down to free every prisoner of injustice — and when Palestine will be free, from the river to the sea.