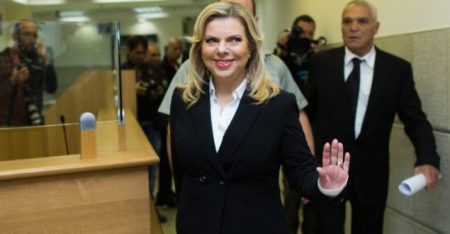 Israeli Channel 2, on Monday, reported that the Attorney-General  will indict Sara Netanyahu, wife of Israeli Prime Minister Benjamin Netanyahu, over suspicions of fraud and misuse of public funds.

PNN reports that, according to Channel 2, the four felonies are: privately employing an electrician who did not win a tender, and covering his work expenses with state funds, improper use of state funds for her late father’s medical care, purchasing garden furniture for the Prime Minister’s Residence and moving it to the Netanyahu’s private residence in Caesarea, and finally exaggerating meal expenses at the Prime Minister’s Residence.

In response to the allegations, Sara Netanyahu’s attorney Yossi Cohen said: “If the reports are correct, we are talking about ridiculous allegations.”

The Netanyahu family issued the following response: “Yair Netanyahu [the eldest son] is vegetarian, Avner [the younger son] and Mrs. Netanyahu almost never eat meat, and the prime minister does not consume food worth thousands of shekels from a steak house. It would be interesting to find out the housekeeper’s part in these orders from 2011.”

Israel police recommended that Sara Netanyahu be indicted over a year ago, and officials from the State Attorney’s Office recently decided to accept the recommendation.