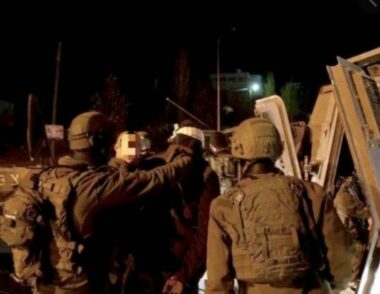 Saif Omar, the mayor of Sneiria, said the soldiers abducted seven Palestinians near the Khallet Hassan area, in the northern part of the village.

It is worth mentioning that the Khallet Hassan area is 4000 Dunams of Palestinian lands between Sneiria village, and Bidya town in Salfit governorate.

Israeli colonialist settlers, illegally squatting on Palestinian lands, have been constantly trying to annex the lands to establish a new outpost that would link between various surrounding colonies and colonialist outposts between Salfit and Qalqilia.