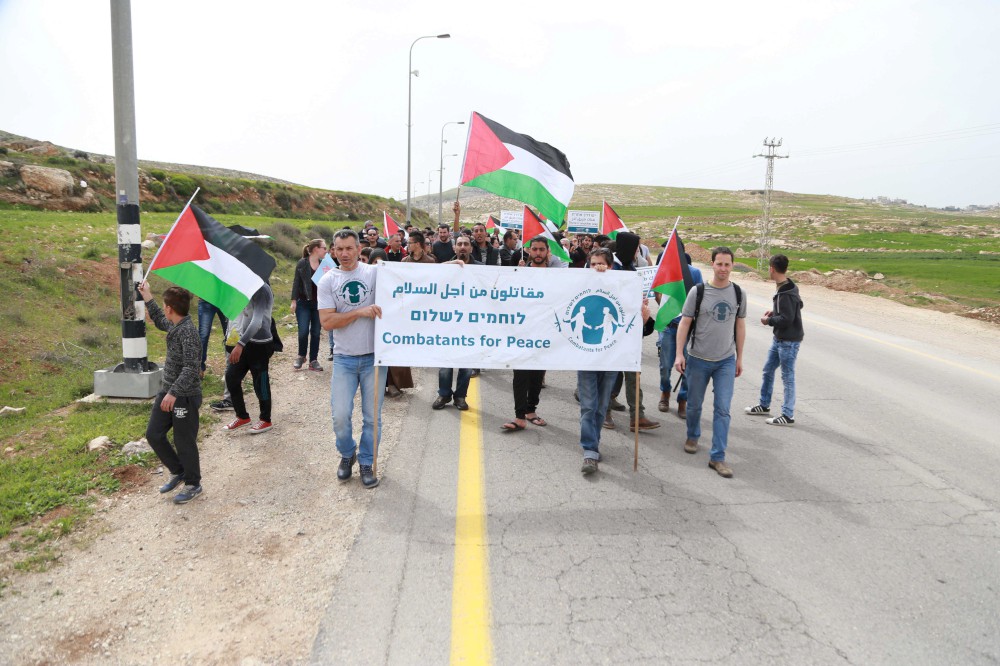 At least 200 Palestinian and Israeli peace activist joined on Friday the freedom March “United Against the Policy of Home demolishing and Evictions”   that was organized by Combatants for Peace and and Standing Together collation at the village of a-Tuwani near the southern West Bank city of Hebron.

The protest started at the settlers’ road of Ma’on nearby settlement as people marched all the way to the village chanting anti-settlement and occupation slogans and demanding an end to the Israeli policy of systematic transfer of village residents from their lands. The children from the villages in the South Mt. Hebron who study in a-Tuwani have suffered from settlers’ harassment while walking to school on a path passing near the settlement Chavat-Ma’on for years before the Israeli authorities decided to assign soldiers to escort them in response to settlers’ violence. Even now, the children’s right to education is being constantly violated when the soldiers show up late – sometimes with a few hours’ delay. At the village, local activist and resident of a-Tuwani, Hafiz Al Ehranie, welcomed the protesters and said “there is a systematic policy being implemented to purser us and other villagers around here to leave. The protest today comes in the same day when US Peace activist Rachel Corrie was killed by the Israeli army in Gaza, we promise to continue her path of nonviolent resistance to end the occupation and achieve peace.” From his part, CFP activist Shai Eluk, told the gathering, “at the start of my military service I was part of the daily checkpoints and the detention of workers as they tried to get into Israel for work. When I decided to meet people of the village without my weapon and uniform and asked them about their story and I heard the hardship they have to endure I went to my commander and I told him I do not want to serve in the Palestinian areas because of the laws and ethics I was raised upon. “ After the speeches residents of the village and their supporters went to the lands, where Two weeks ago, settlers uprooted olive trees and spread poison to prevent growth, and planted new ones.