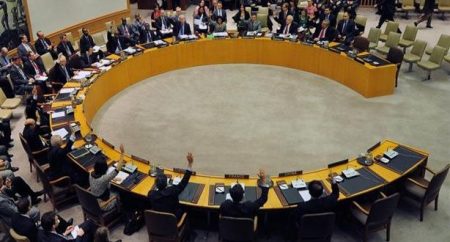 The United Nations Security Council, on Friday, convened an emergency session, at the invitation of eight countries, to discuss US President Donald Trump’s decision to unilaterally recognize occupied Jerusalem as the capital of Israel.

During the meeting, the council expressed “grave concern over the dangers of escalating violence,” just following the decision.

During the session, the UN Special Coordinator for the Middle East Peace Process, Nikolay Mladenov, in a video from Jerusalem, said that Palestinians are observing “three days of anger” from December 6 to 9. He warned of “religious extremism” and called on world leaders to “show wisdom” to restore calm to the region.

Jerusalem is the most complex issue in the Palestinian-Israeli conflict, he said, adding that Jerusalem is a symbol of Islamic, Christian and Jewish religions. He stressed that negotiations between the two parties is the means to determine the fate of the Holy City.

According to  WAFA, the emergency meeting of the Security Council was held under the request of Egypt, Senegal, Uruguay, Bolivia, Sweden, France, Italy and the United Kingdom.

Swedish Ambassador Olof Skoog said that Resolution 2334, adopted on December 23, 2016, affirms that the Security Council “will not recognize any changes in the borders of June 4, 1967, including Jerusalem, unless the two sides agree through negotiations.”

Egypt’s UN ambassador, Omar Abu al-Atta, said the US decision has alarmed the world and spiked fear of the consequences of unilateral decisions that violate international law and threaten the system of political relations.

He added that what the world is witnessing, today, is a test of the system and the rule of law, stressing that success will not be achieved, unless collective action within the framework of international law is taken.

Representatives of the member states of the UN Security Council – England, France, Italy, Bolivia, Uruguay, Senegal, China, Ethiopia, Kazakhstan and Russia – rejected the unilateral decision of the US administration, as it is seen to be a violation of international resolutions. They called for abiding by these laws and the status quo in Jerusalem.

They said that the decision would fuel violence in the region, calling on all parties to exercise restraint and not to take any steps that would change the situation in the city. They praised the role of the Hashemite Kingdom of Jordan in protecting holy sites in Jerusalem.

They affirmed that their countries oppose the US step and will keep their embassies in Tel Aviv, and that there is no need for such decisions that would affect security in the region and in the world. They stressed that everyone should work to the effects of this decision and return the parties to the table of negotiations.