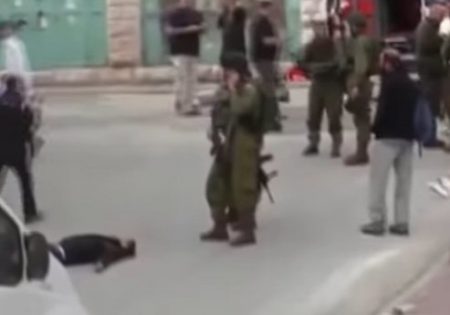 SHARMINI PERIES: It’s The Real News Network. I’m Sharmini Peries, coming to you from Baltimore. An Israeli Military Court handed down an 18-month sentence to Israeli soldier Elor Azaria for the murder of Palestinian, Fatah Al-Sharif. Al-Sharif was lying on the ground at the time of the fatal shooting.

SHARMINI PERIES: Azaria, the soldier was convicted in early January of manslaughter for shooting Fatah Al- Sharif and for inappropriate conduct. We reported his conviction in Real News interview that was published on January 5th. Despite the light punishment, large segments of the Israeli public expressed outrage over the fact that he was given a punishment at all. Joining me now to discuss this further is Shir Hever. Shir is a Real News correspondent and he’s speaking today with us from Heidelberg, Germany. Thanks for joining us, Shir.

SHIR HEVER: Thank you for having me, Sharmini.

SHARMINI PERIES: So, Shir, the prosecution was very controversial at the time. He was prosecuted but the sentence seemed to spur more controversy. What’s going on?

SHIR HEVER: What’s going on is that the case of Elor Azaria exposes the contradictions in the Israeli occupation in a very clear way. According to the UN data there were 105 Palestinians who were killed by Israeli forces in the year 2016. And Fatah Al-Sharif is only one of 105. But the number of people who were actually put on trial for all of these killings is just one. It’s just Elor Azaria. And in his case, it’s not the fact that this execution of Fatah Al-Sharif was very clearly a murder, but it was the fact that he was caught on camera. And it was the fact that he is one of the least protected members of the Israeli military forces because of his own background, because he’s a Mizrahi Jew from a relatively lower class of the Israeli society. He’s not so well connected. And so, that caused a lot of outrage because why does he have to stand trial when so many Israeli soldiers and officers have killed many more Palestinians and were completely unaccountable for it? So, the fact that he was convicted of manslaughter and inappropriate conduct was already scandalous. It was scandalous because it was a very, very light conviction. It had nothing to do with the actual crime that he committed because he did commit a murder. But on the other hand, it caused, mostly within Israel, outrage from the right wing who were saying, “how dare you put this brave soldier on trial for doing what the government is saying, again and again, is absolutely legitimate? We should go out and kill Palestinians on every occasion especially those Palestinians who are suspected even on the slightest of suspicions of preparing to carry an attack of any kind. Now, Elor Azaria, a military medic, he approached the scene. He sees a Palestinian bleeding on the ground and instead of acting as a medic and rendering assistance he takes out his gun and shoots the man in his head. During the trial, Elor Azaria did every possible mistake. He contradicted his own testimony, had very poor lawyers who mounted a very terrible defense. And that put the Israeli Court, the Military Court in a very difficult position, in a very tight spot. In fact, you could say this whole trial was pretty much predicted, the outcome was predictable. But it was the Military Court itself who stood on trial because they had the public opinion and the Israeli government calling on them to acquit. Calling on them not to punish Elor Azaria. And on the other hand, they had every legal reason and every shred of evidence saying they have to convict Elor Azaria of a much more serious crime. Azaria never expressed any remorse for the killing of Al-Sharif. So, what they did in the end, the sentencing of 18 months, is a very odd decision. I think it shows that the Military Court is completely failed to have any kind of meaningful strategy in light of the situation because what they did is the average. The prosecution said for a conviction in manslaughter and inappropriate conduct the minimum sentencing should be three years. The Israeli government was saying you should acquit him completely and set him free. So, they just took the middle. And by doing that they have lost both the support of the public opinion in Israel, which is now siding against the judges and the lawyers and so on, and there are massive demonstrations in support of Elor Azaria. And they’ve also lost all credibility as a court because they’ve given a sentence that has nothing to do with the law, nothing to do with the rule of law.

SHARMINI PERIES: And the other extraordinary thing about this, Shir, was that various political members of the government, and so on, were also getting involved. Making statements about what they thought should happen, in spite of the court, you know, considering this case.

SHIR HEVER: Absolutely. The former Minister of Defense of Israel, Moshe Ya’alon, he said that Elor Azaria has to stand trial for what he did. What he did was wrong, was not part of the military heart in that he was not following orders. And he was fired from his position as Minister of Defense and replaced by, I think, Avigdor Lieberman, the new Minister of Defense, who supported Elor Azaria from the start. So, this trial is not just about this young soldier of the rank of Sergeant. This is a major divisive point in Israeli public opinion. The Minister of Education Naftali Bennett has now said today, that unless Elor Azaria will be immediately pardoned from serving this jail sentence that it would be a security risk to the State of Israel. Which is a very odd statement. But it shows that for him this is a clear message that all Israeli soldiers should feel free to use their guns at will against Palestinians without any fear of repercussions. And even the head of the opposition in Israel, who is supposed to be from the left, although that argument is very questionable — he said Elor Azaria was operating in an impossible situation. He was asked to serve in an impossible situation. If he would then follow up from that statement and say, actually there is no reason for the Israeli military to control a civilian population in the city of Hebron and the rest of the West Bank, and expecting Israeli soldiers to act as police officers in an occupied territory will of course continue to create stories like we see now with Elor Azaria and the murder of al-Fatah Al-Sharif. If he would have made that statement, that would have been a very welcome statement and a very important statement. But he did not make that statement. He does not explain how we expect the Israeli military to control 4½ million Palestinians under military occupation without innocent people being killed repeatedly.

SHARMINI PERIES: Alright. I thank you so much for joining us today, Shir, and we’ll be following up on the story with you soon. Thank you.

SHARMINI PERIES: And thank you for joining us on The Real News Network.