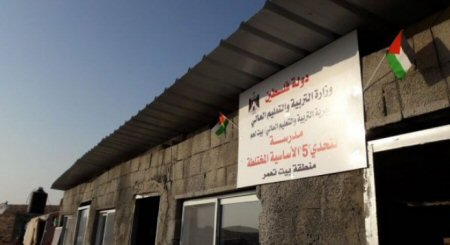 The settlement organization known as “Regavim” has filed a lawsuit, in an Israeli court, to demolish the Tahaddi 5 school, in the Beit Ta’mar area, east of Bethlehem.

The head of the office for the Wall and Settlement Resistance Committee in Bethlehem, Hassan Brejiya, said that the lawyer of Saint Yves for defense of land, Emile Mashreqi, told the committee that the settlement institution has filed a racist claim in an Israeli court, against the school, in order to demolish it.

Brejiyya explained, according to the PNN, that the school has been subjected to demolition attempts over and over, and had previously been demolished on the first day of school, for the year 2016-2017.

He pointed out that this institution is responsible for monitoring Palestinian homes in Area C, and is always directing the Israeli Civil Administration to demolish houses and influence the suspension of construction there, as it was behind the administrative demolition in the occupied West Bank, which was stopped recently.