First Palestinian Elected to US Congress 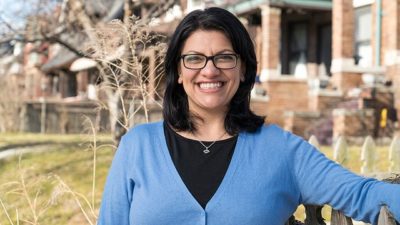 On Tuesday, November 6, the first Palestinian-American was elected to the U.S. Congress, marking an historic day for Palestinians living in exile in the United States.

42 year old Rashida Tlaib, a Palestinian refugee who lives in Dearborn, Michigan, is known as  an advocate for minority groups.

She was elected into Michigan’s 13th Congressional District,

Tlaib joins Ilhan Omar as the first two Muslim women in the U.S. Congress, and Omar is the first Somali-American to be elected into congress,

Tlaib’s extended family in the West Bank celebrated her win on Wednesday, with her uncle Bassam Tlaib stating, “She has become “a source of pride for Palestine and the entire Arab and Muslim world”.

He spoke with Reuters News from the small village of Beit Ur Al-Fauqa.