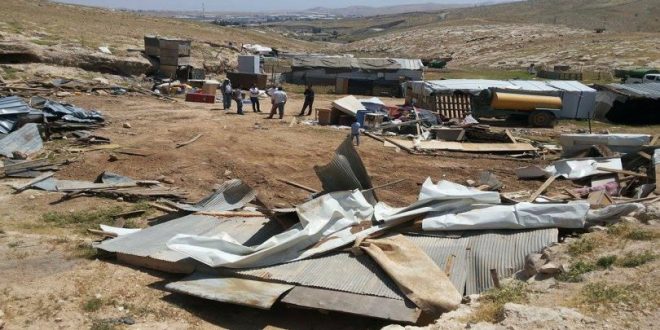 He added, according to the PNN, that recent days have been subject to the rumble of Israeli bulldozers, as Palestinian agricultural land in Ras al-Ein has become the apparent site of a new access road into the area.

Meanwhile, as an Israeli military patrol is deployed in the territory, so as to protect the settlers, Palestinians are prevented from reaching their land lots, which covers an overall area of some 500 dunams.

Israel stepped up illegal construction of settler homes in the occupied West Bank, just one week after a UN Security Council resolution deemed settlement activity in the area outlawed and US Secretary of State John Kerry reiterated his country’s firm position, with regard to a two-state peace agreement.

In a developing story, Israeli forces morning have reportedly demolished the homes of Bedhouin families in the village of Khan Al-Ahmad, occupied East Jerusalem.

Al-Jahhalin added that the demolition comes in very cold weather, and will leave his family of 14 members homeless.

He added that Israeli bulldozers finished the demolition and moved to another Bedouin community, where they closed down the area and began another demolition.

Israeli Justice Minister Ayelet Shaked said, on Saturday, that her far right party, “Jewish Home”, will propose to annex the illegal West Bank settlement, saying that the Trump administration will back the step.

According to Jpost, Shaked made this statement while speaking to the Hamateh news program on Channel 10, where she said that this is the first step to other annexations, and could lead to the entire annexation of Area C.

“We want to annex Ma’aleh Adumim. In the distant future, I am in favor of annexing Area C,” Shaked said.

The 90,000 Palestinians living there would be given the same rights as Israelis, if the policy were implemented, she said. However, she added, Areas A and B should not be annexed for “demographic reasons.”

The settlement is located 10 minutes from Jerusalem and has a population of some 37,000 Israeli settlers.