Settler Who Planned Dawabsha Arson Attack to be Released 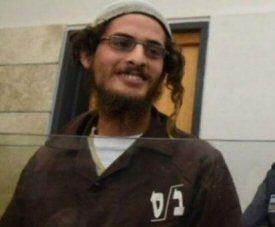 On Thursday, an Israeli court decided to release the main settler who planned the arson attack on  the Dawabsha family in Douma village, near Nablus, killing three people, including a baby.

According to the decision of the Israeli court in Lod, Israeli police must release the accused and transfer him to house arrest.

The court’s decision was based on the allegation that the accused had participated in planning the crime of throwing Molotov cocktails at  the Dawabsha family home, but did not participate in the operation itself.

The court decided that the accused settler be subject to house arrest, and wear an electronic armband that tells the Israeli police about his location, according to the PNN.

The crime of throwing Molotov cocktails at the house of Dawabsha occurred on the 31st July, 2015, and led to the death of baby Ali Dawabsha and his parents, Raham and Saad, while the 5-year-old child, Ahmad, suffered serious burns, but survived the crime.

Nasser Dawabsha, a relative of the afflicted family, told WAFA that the court decided to place the murderer, a minor, under house arrest and banned him from leaving the country or to use the phones or internet.

“It is a sad day for the family,” he said. “The decision brought back to us dreadful memories of the fire at my brother’s  house and when we tried to save them. The scene has been re-enacted with the court ruling.”

Dawabsha accused the Israeli court and judge of being racist and of double standard, saying that if the accused was Palestinian he and his family would have been punished severely and their home demolished, and even their entire village would have been subjected to collective punishment. “But, when the crime is perpetrated by Israelis, the courts try to find anything to get them out of it.”

He said, “The Israeli court system gives impunity to the murderers of Palestinians and the more reason to continue to attack them.”

He said that the family has no choice but to pursue the case at Israeli courts before appealing to international courts for justice, if all efforts to convict the murderers fail.