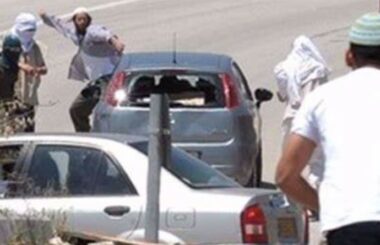 RAMALLAH, Wednesday, November 24, 2021 (WAFA) – Three Palestinians were today injured, one of them reported in critical condition, in Israeli settler attacks on their vehicles in the occupied West Bank, according to local sources.

They told WAFA that settlers threw rocks and smashed the windshield of a car driven by a Palestinian from Nablus on a road north of Ramallah causing the car to overturn.

The driver was critically injured and had to be flown to hospital while his son, who was in the car, received moderate injuries.

Another Palestinian was injured in a separate incident when settlers attacked his car near the village of Duma, south of Nablus, shattering the car windows.

Yesterday, a 15-year-old girl was also moderately injured when settlers attacked a car, on a northern West Bank Road.

Israeli settlers have intensified their attacks against Palestinian commuters on West Bank roads, causing damage to many cars and threatening the life of the commuters.

The attacks occur under the eye of the Israeli soldiers, who are present in large numbers throughout the occupied West Bank. Settlers have also attacked Palestinian villages