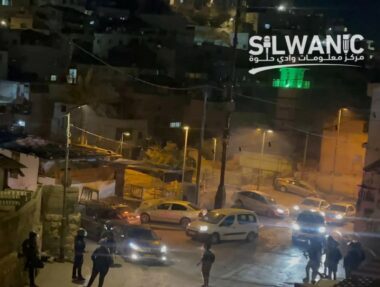 Israeli soldiers invaded, on Wednesday evening, the towns of Silwan and the al-‘Isawiya, in occupied Jerusalem, and abducted a young man.

The Wadi Hilweh Information Center In Silwan (Silwanic) said the soldiers abducted a young man, identified as Mansour Mahmoud at the main entrance of al-‘Isawiya town.

Silwanic added that the soldiers cuffed the young man and moved him to the al-Maskobiyya interrogation facility.

The soldiers also summoned for interrogation a young man from Silwan, identified as Ehab Abu Sneina.

The soldiers also closed a street in Be’er Ayyoub neighborhood, in Silwan, and prevented the Palestinians from crossing, leading to protests, Silwanic said.

It is worth mentioning that a court hearing that was scheduled for two Palestinians from Silwan, was postponed until December 9th.

The two, identified as Hamza Tawil, 16, and Ahmad al-Jolani, were abducted by the soldiers earlier this month.