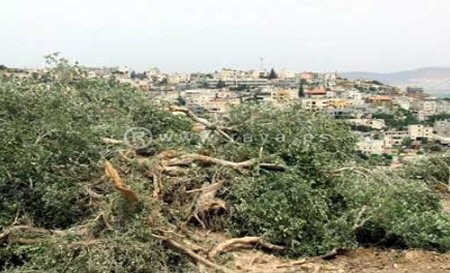 Israeli settlers from Beit Yatir and Awlad Yaqub Dalia settlements — expatriated, by force, from Palestinian citizens living southeast of Yatta, south of Hebron —  attacked, on Monday, farmers in Masafer Yatta, under the protection of the Israeli army.

The coordinator of the local committee against the wall and settlements in eastern Hebron, Rateb al-Jabour, said that a number of settlers assaulted farmers near the village of Umm Lakhus and Khirbet Bir al-Ad, injuring a number of citizens.

Jabour added that settlers posted signs under the protection of the Israeli forces, expanding the border of their settlement to reach the entrance of tents and a cave where Ziad Makhamra and his family live, in the village of Umm al-Arayis, east of Yatta.

Jabour called on international and human rights organizations to intervene in putting an end to these practices.

Al Ray notes that the lands which the settlers attacked, today, have been subjected to the uprooting of dozens of olive trees, several times, in an attempt to further expand settlements.