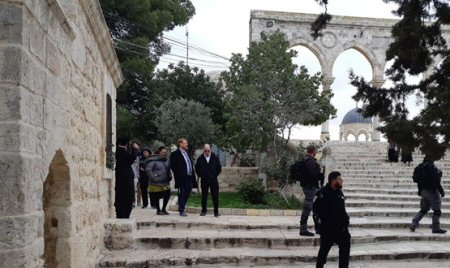 Locals told Ma’an News Agency that Glick, who was escorted by other Israeli settlers, performed and filmed a wedding ritual inside the compound alongside his fiancee.

An Al-Aqsa guard described the step as a provocative and dangerous challenge to the feelings of Muslims and worshipers.

Palestinian Minister of Islamic Endowment, Youssef Ideis, said that Israeli violations of the sanctity of Al-Aqsa Mosque have reached a serious stage.

The American-born rabbi was shot in the upper chest, at close range, in 2014, when an assassination attempt took place in Jerusalem, over Glick’s extremist policies and racial incitement towards Palestinians.