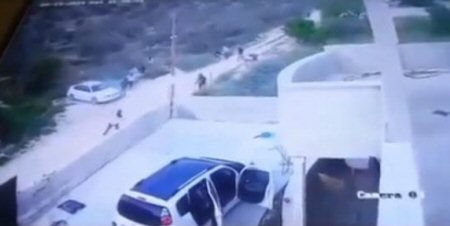 Masked Israeli settlers have been caught on camera attacking a Palestinian family in the occupied West Bank, with rocks.

Israeli human rights organization Yesh Din said that a group of masked settlers, from Yitzhar settlement, attacked a family in the neighboring Palestinian village of Urif, south of Nablus, with stones, on Saturday.

Security camera footage from the village shows a Palestinian mother carrying a child into a car, while other family members walk around it. The settlers then come running down the road and start hurling stones at them.

Afterwards, the mother and a family member rush to grab their children, and then flee to the house.

According to Urif residents, some 50 settlers stormed the village’s eastern neighborhood, smashing car windows and throwing stones at houses.

An Israeli army spokesman  said that the “friction” between Palestinians and Israelis ended when soldiers and policemen dispersed the crowd. However, they did not arrest any settlers.

The United Nations said, in a February report, that acts of violence and vandalism committed by Israeli settlers, against Palestinians and their property, have risen since the beginning of 2019.

About 600,000 Israelis live in over 230 illegal settlements built since the 1967 occupation of the Palestinian territories of the West Bank and East Jerusalem, according to the PNN.

Palestinians want the West Bank as part of a future independent Palestinian state, with East Jerusalem al-Quds as its capital. Israel’s continued settlement expansion, on Palestinian territories, has been a major sticking point in Israeli-Palestinian talks, which have stalled since 2014.