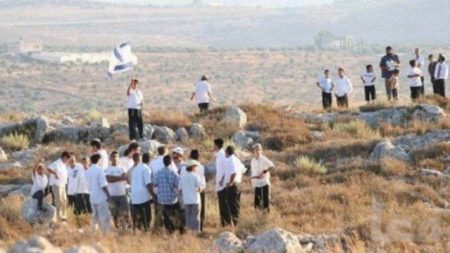 Groups of Israeli settlers, on Tuesday, broke into Al-Hafira hill, south of the occupied West Bank city of Jenin, and performed Talmudic rituals after spreading out in the area.

Local Al Ray sources reported that the settlers have dispersed over the hill, and in the area classified as an archaeological site which is located among the lands of Arraba town, where several Palestinian families reside.

The sources added that the settlers frequently storm Al-Hafira hill and perform multiple Talmudic rituals, on the claim that it’s a Jewish historical site.

They indicated that Israeli soldiers accompanied the settlers during the storming, to give them protection.