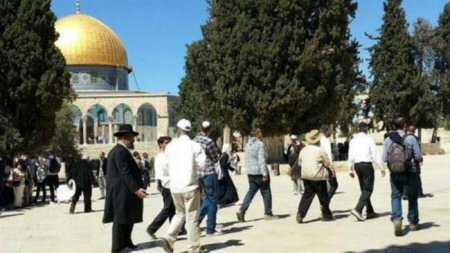 Dozens of Israeli settlers, on Wednesday morning, stormed the courtyards of Al-Aqsa Mosque from Maghariba gate, under heavy protection of Israeli police.

Local sources said, according to Al Ray, that around 131 Israeli settlers stormed the mosque, toured its compound and listened to Talmudic rituals.

The sources pointed out that the Palestinian worshippers faced the settlers with chanting.

Extremist Israeli settlers and politicians have been violating the sanctity of Al-Aqsa Mosque on an almost daily basis and always under the protection of armed occupation forces, which often attack Palestinian worshipers who try to protect their holy site.