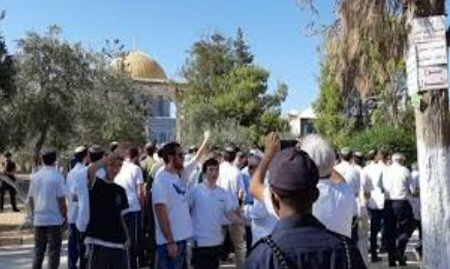 Dozens of Israeli illegal settlers, on Wednesday morning, broke into the courtyards of the Al-Aqsa Mosque Compound via the Mughrabi {Moroccan} gate under heavy military protection.

Jerusalemite sources reported, according to Al Ray Palestinian Media Agency, that some 48 settlers, accompanied by rabbis, broke into the mosque, roamed its courtyards, and received explanations on the alleged “Temple Mount”.

According to the Jerusalem Islamic Waqf, some of the settlers performed Talmudic rituals at al-Rahma gate, which was being stormed by Israeli intelligence officers at the same time .

Sources added that worshipers, educational students, and guards of the mosque who were present, there, defended it by chants and Takbeer (chanting “Allahu Akhbar… God is Greatest!”), and hampered the settlers from roaming it freely.

The Al-Aqsa Mosque Compound is exposed,  on a daily basis, to the storming of extremist Israeli settlers, at which they perform Talmudic rituals and desecrate its sanctity, in an attempt to upset the temporal and special division of the mosque, and further Judaize the occupied Palestinian city of Jerusalem.