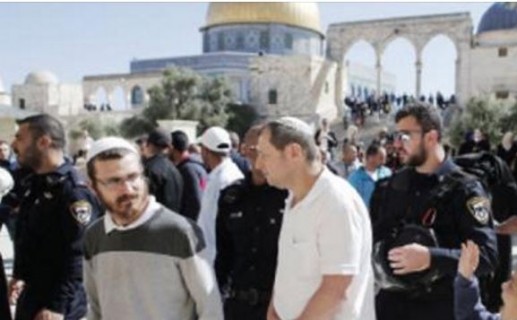 A group of Israeli settlers escorted by  policewomen, on Sunday, resumed their provocative tours into annexed East Jerusalem’s al-Aqsa Mosque compound, provoking tension with Palestinian worshipers, who chanted religious slogans to protest their entry, according to witnesses.

During the entry of the settlers, Islamic Waqf personnel and worshipers at the scene prevented an extremist settler from performing rituals and Talmudic prayers at the holy Islamic site.

Last year, according to WAFA, tension ran high throughout the West Bank, including Jerusalem, against the backdrop of Israel’s repeated assaults on the mosque, including attempts to unilaterally enforce of a temporal division at the site between Muslims and Jews.

Prior to the unrest in October 2015, the Euro Mediterranean Human Rights Monitor pointed out, in a report, that Israeli incitement and violations against Arabs in Jerusalem have increased dramatically in 2015.