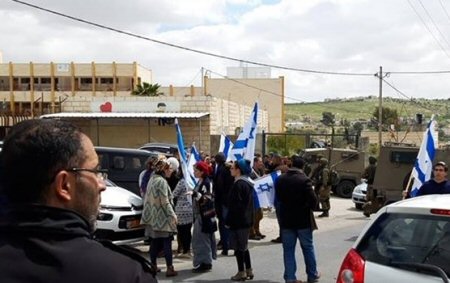 A group of Israeli settlers attempted to raid two Palestinian elementary schools on Tuesday afternoon, in the Tuqu village, southeast of the southern occupied West Bank district of Bethlehem.

Locals told Ma’an News Agency that heavily armed Israeli forces escorted a group of Israeli settlers who were gathered, holding Israeli flags, near the two mixed elementary schools, and attempted to break in.

Sources mentioned that teachers and school staff prevented Israeli settlers from entering the premises and closed the main gates.

The attack caused panic among the students, forcing the two schools to dismiss them early, in fear that the settlers would become violent.

It is noteworthy that the Palestinian Ministry of Education released its annual report, for 2017, documenting the Israeli government’s violations against Palestinian education, saying that 80,279 Palestinian children and 4,929 teachers and staff were attacked by Israeli settlers or soldiers.

According to the report, nine students were killed, while 603 students and 55 teachers and school employees sustained live or rubber-coated bullet wounds during Israeli raids into schools, or were being run over by Israeli military jeeps, while dozens of students suffered from suffocation due to inhaling tear-gas fired by Israeli forces against them.